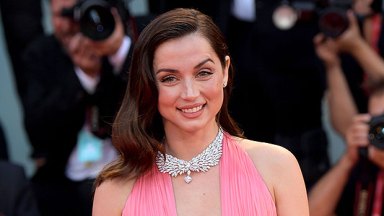 
Ana de Armas, 34, shed some tears after the audience gave her a 14-minute standing ovation at the premiere of the Netflix movie, Blonde, which premiered at the Venice International Film Festival on Sept. 8. After the screening came to an end, the starlet was seen with tears streaming down her face, according to Variety. The crowd raved at her performance in the biopic film about the late Marilyn Monroe.

The Deep Water actress also channeled her inner Marilyn while on the red carpet earlier that day in Venice, Italy. Ana stunned as she stepped out in a plunging pink floor-length gown designed by Louis Vuitton for the Blonde premiere. The exquisite ensemble emulated Marilyn’s iconic white dress from the 1955 movie The Seven Year Itch, marking a subtle nod to Hollywood (and Marilyn) history.

For the black tie event, Ana also had her brunette tresses styled in perfect Hollywood waves. Her accessories were also on point as she was iced out in diamonds by fine jeweler Messika. The show-stopping necklace included detailed wings that were also crafted to appear as if they were coming together around the starlet’s neck. She completed her retro look with a glistening diamond bracelet and diamond stud earrings.

Back in January 2021, Ana, told The Times of London that it took her many months to nail the accent of the legendary Marilyn. “It took me nine months of dialect coaching, and practicing and some ADR sessions [to get the accent right]. It was a big torture, so exhausting. My brain was fried.” But nevertheless, the rising star did express her gratitude for being able to take on this specific role. Ana told The Hollywood Reporter, “I did this movie to push myself, because I thought it was a gift,” she said. “And this movie changed my life,” she added.

Although Blonde premiered at the Venice International Film Festival on Sept. 8, the nearly three-hour-long biopic film will also hit select theaters in the United States on Sept. 16. Later, the Andrew Dominik-directed project will debut globally on Netflix on Sept. 28. Some of Ana’s costars in the picture include Adrien Brody, Xavier Samuel, Bobby Cannavale, Sara Paxton, and more. Bullet Train actor, Brad Pitt, 58, is one of the film’s star producers along with Dede Gardner, Jeremy Kleiner, Tracey Landon, Scott Robertson, and Christina Oh as executive producer. Brad was also photographed with Ana at the premiere on Sept. 8, wearing black Adidas Gazelle sneakers at the prestigious event.