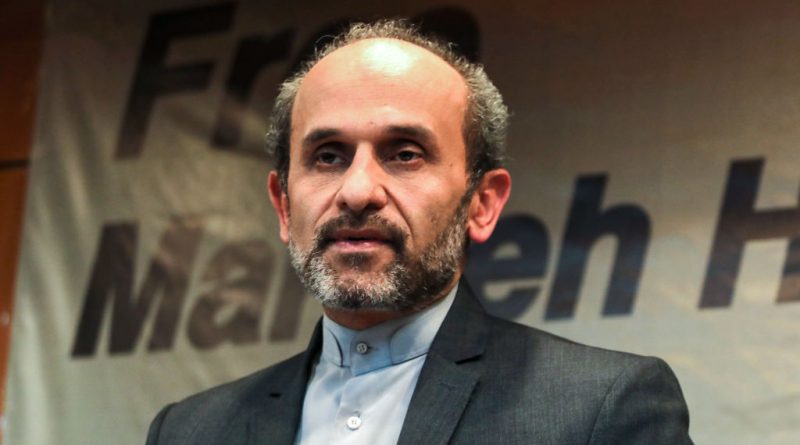 
Three years ago this week, Iran’s Islamic Revolutionary Guard Corps (IRGC) shot a passenger plane out of the sky, killing all 176 civilians.

Ukrainian International Airlines flight 572 was taking off amid a showdown between the U.S. and the Islamic Republic. For Iranians, PS572 became a totem of a government at once incompetent and callously indifferent to the welfare of its people—a government that still has not been held accountable for the crime. Even before the current rebellions that have roiled the regime for months, the downing of the passenger plane was marked by protests like those across Europe on Sunday by families of the victims of PS572.

One family has a particularly complicated relationship with this tragedy. Aboard the plane was Mohammad Amin Jebelli, a 29-year-old medical student whose uncle, Payman Jebelli, is now known for his loyalty to the Iranian regime. In 2021, Iran’s Supreme Leader, Ayatollah Ali Khamenei, appointed Jebelli to run the Islamic Republic of Iran Broadcasting (IRIB), a powerful state-controlled media group. With direct ties to the IRGC, the network is also notorious for broadcasting “forced confessions” as a perpetual tactic to advance the regime’s propaganda and spread public havoc. Jebelli is also a close confidant of Khamenei’s second-eldest son, his presumed successor.

The death of Mohammad did not visibly shake the loyalty of Payman, or most of the Jebelli family. But it was “the final” straw for Payman’s younger brother, Meisam Jebelli. In late 2020, 43-year-old Meisam defected, along with another Jebelli brother. Both men could have had powerful positions in Iran, thanks to their older brother’s immense influence. Now both are asylum-seekers struggling to make a living abroad, yet proud of their decision.

TIME spoke with Meisam by phone. The interview has been lightly edited for clarity and readability.

TIME: What was that final straw that prompted you to break from your family and leave Iran? Is it correct to assume that you’d be at great risk if you ever decide to go back?

Meisam Jebelli: The final [straw] was after my nephew’s killing by the IRGC aboard the Ukrainian passenger jet in 2020. It was hard to fathom how after such a severe tragedy, both of my brothers, the chief of IRIB as well as Amin’s own father—who’s a surgeon and also severely brainwashed by the regime’s ideology—would still defend the government. I saw my brother who’s now in charge of the regime’s biggest propaganda machine lie to my face—to the whole country—about the fact that killed his own nephew. I knew right then and there that I can no longer take it anymore.

But even before the heart-wrenching events of January 2020, I knew I was always different. From my early teenage years, I knew I didn’t believe in the ideology of my family. The same is true about my younger brother. I’ve had many altercations with my parents and siblings over the years, physical ones, even with my sisters. Each time, I was hoping that I may be able to change their minds; but every single time I realized that I cannot, and it only led to more distance between myself and the rest of my family.

I don’t think there’s anything harder than having to leave your family, your blood, your parents, but I just couldn’t live with their lies, with their support for a brutal regime that has killed members of our own family—whether during the Iran-Iraq war or in the downing of the Ukrainian passenger jet, or by way of ideology and power. I feel I’ve lost my family and loved ones to this regime.

And of course, I’m afraid that I may even be killed if I go back to Iran. I live and breathe the news, images, and stories that are coming out of Iran day in and day out. My heart is there with the people, and I calm myself with the knowledge that while I’m away, I may be able to use my voice to bring more awareness to the crimes of the regime from the outside.

Peyman Jebelli, chief of the world service for the Islamic Republic of Iran Broadcasting (IRIB), speaks during a press conference in Tehran on January 16, 2019.

TIME: Take us through your childhood and explain the culture that has fostered the regime’s most devoted loyalists.

MJ: The crazy thing is that my parents were semi-religious prior to the revolution, but they were slowly drawn to [Grand Ayatollah Ruhollah] Khomeini’s charisma and began to believe his propaganda to an extent that they, just like millions of others, turned into fanatic Islamic ideologues.

When you talk about the “ideology of the regime” you have to understand that they drill their toxic principles in your brain from the minute you are born. You live a life where your personal values are married with your religious beliefs—their version of course—all with the sole commitment to preserve this regime at all costs. Phrases such as “martyrdom” entwined with beliefs of “independence, freedom, and Islamic Republic” were among the dominant narratives of the years following the 1979 revolution and the Iran-Iraq war. Pain, blood, violence, mourning, and darkness were all that we grew up with in our bigoted families and isolated communities.

For the regime, the dominant culture was supposed to be filled with violence, death, and ugliness. For my family and many others alike, whatever would advance this “holy regime” was and still remains sacred, and the smallest things that could divert them from the regime or in any way weaken or hurt the pillars of their “revolution” are condemned.

Would you then say that it’s such ideology that weaponizes the defenders of the regime to brutally crack down on their fellow countrymen and women and fight for the forces in power?

MJ: Yes. These insular forces are capable of theft, rape, torture, and murder, and the worst part is that they enjoy it all. They don’t think like you and I. They wholeheartedly believe in the virtue of their prophetic mission—so much that they’re ready to kill even their own family members, and be killed for it. This ideology is what helped strengthen their grip over the years and is bearing fruit on the streets as we speak. The power of ideology is far greater than anything you and I can ever understand. Those who brought in the Islamic regime in 1979 were standing in the right place and the right time in history and used ideology to build an invincible army to defend its mission.

TIME: Do you think the regime is weak and scared? How do you evaluate the diehard revolutionaries now?

MJ: It’s absolutely impossible to say that they have not felt fear. Their impetuous reactions and policies; their mass-scale raw violence against protestors; their irrational, brutal, crude, illegal and violent executions are clear evidence that they’re drowning and are desperately trying to survive. At this stage they need a major strategy to help them… but all the evidence is indicative of a crisis that they’re truly struggling to contain.

There’s a common saying among the clergy: الغَریق یَتَشَبَث بِکُل حَشیش, which translates to how a person would cling to any weed or branch to prevent from drowning. History has proven that dictatorships ultimately fall. When, exactly, this would happen for Iran depends on many factors.

TIME: How do you see the future of protests in Iran? When can we expect real change?

MJ: When there’s a united opposition outside that reflects the demands and voices of the Iranian people inside Iran. When the majority of the people inside Iran believe in this revolution, that’s when you’d see real change. There are so many courageous people who have accepted the reality that they’ll be injured, imprisoned, tortured, raped and even killed, but have sacrificed their life, their entire being and comfort to continue this fight inside Iran. But there are still many who are afraid.

What we’re seeing on the streets right now is only 1% of the unhappy population. So many of them just simply don’t know how to fight back against a regime that shows nothing but violence against dissent. In Iran, more than ever in our history, you have unity, and the events of the past three months have been clear indications of this united nation. Iranians from all four corners of the country, from Kurds, to Baluch, to Lurs to Azeris, are all united for a free Iran. You see, truth is like running water—it’ll find its way even if it’s faced by rocks along the way.

TIME: Do you think foreign powers (i.e. the U.S., Canada, U.K., E.U.) have done enough? What do you make of their statements, sanctions against government officials (including your own brother), and other measures as such?

MJ: The truth is that no one really cares about the people of Iran, and history has proven this over and over again. The western condemnations have always been limited to their interests. Meaning that they’ll condemn, show a measured level of force, and issue statements up until the point that their interests are preserved. At present these sanctions are meaningless for the average person in Iran—the young women and men who are detained or are awaiting execution.

TIME: If you were to speak with your family and your two brothers, what would you tell them?

MJ: To every single person in my family—except the brother who stepped on his nephew’s blood and that of so many other innocent Iranian people—I’d say that I still love them, but am worried for them.