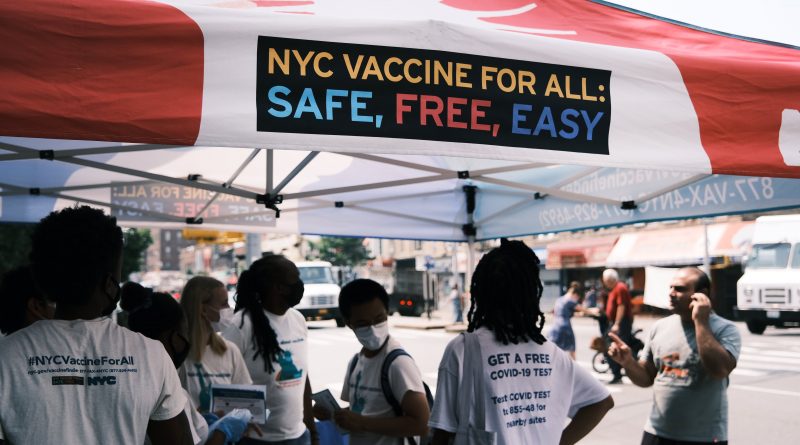 A city-operated mobile pharmacy advertises the Covid-19 vaccine in a neighborhood near Brighton Beach on July 26, 2021 in the Brooklyn borough of New York City.

When it comes to vaccine mandates, Americans want them when they fly, but not when they rock.

The latest CNBC All-America Economic Survey shows the public nearly evenly divided on the issue of vaccine mandates countrywide — whether they should exist at all and especially where they should exist.

The poll of 802 Americans around the nation found 49% favoring vaccine mandates and 46% opposing, or a difference that’s within the polls 3.5% margin of error. Five percent said they were unsure.

The mandate debate is among the most pressing political and economic debates for the nation as it struggles with how to get back to normal amid a resurgent virus and many refusing to become vaccinated. The survey shows government officials and politicians could face a backlash depending on where and how they implement vaccine mandates.

The poll shows 68% of Americans have been vaccinated, close to the data from the Center for Disease Control. Republicans lead the groups of the unvaccinated with just 58% saying they have received any shot at all, compared to 87% of Democrats and 63% of Independents. Self-described conservative Republicans have the lowest vaccination of any demographic group at just 49%.

Jay Campbell, a managing partner Hart Research Associates, the Democratic pollster for the survey, said the results show an “ideological split within the Republican Party” over vaccinations. “Those who don’t call themselves conservatives — moderates and the small number who call themselves liberal — are essentially almost as vaccinated as Democrats,” he said. “The (difference) between those and the conservative Republicans is absolutely astounding.”

When mask mandates are appropriate

Beyond the overall idea of a mandate, CNBC asked whether they should be required in specific situations and found Americans making clear distinctions, though the reasons are not always clear.

At 67%, there’s overwhelming support for a vaccine mandate for hospital workers. In addition, 57% say there should be mandates on cruise ships and 54% support them for airplanes. Just 50% back mandates for federal government workers.

Other areas, even for places where people crowd together, do not enjoy majority support: just 46% support mandates at concerts and other big events, only 40% want them in their workplace, 38% support mandates in restaurants and 36% in malls and large stores. Majorities of the vaccinated even oppose mandates in restaurants, hotels and in malls and large stores.