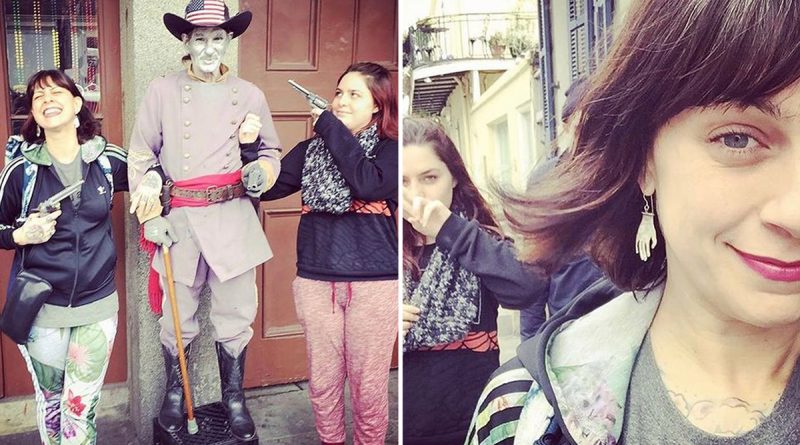 Danielle shared a series of photos from the trip on Friday, which included a selfie of the mother-daughter duo, a photo of Memphis having her palm read and a pic of the pair holding guns as they posed next to a statue.

Alongside the photos, the 45-year-old wrote: “A few years ago I took my daughter @lolahbearxo to New Orleans for her birthday.

“I had been there several times and was so excited to finally be able to share the experience with her. New Orleans is such a special city, full of history and culture.

“You can feel the magic pulsing in her veins.”

The American Pickers star continued: “I remember when Hurricane Katrina hit and the absolute devastation that was wrought afterwards.

“The people of New Orleans were left to fend for themselves, completely ignored by the government.

“They received no help when they needed it the most.

“I’ve seen firsthand the devastation that can occur after hurricane.

“I knew after Hurricane Maria that I needed to get involved with disaster relief efforts. I’ve added a few infographics for places to donate.

“It will be weeks before power is fully restored to Louisiana and people need help.”

The post concluded with Danielle pointing out that she included resources of how her followers can help those impacted by Hurricane Ida.

Memphis also seems to fondly remember the trip, as she shared a throwback photo with Danielle posing in the rain with umbrellas on her Instagram Story.

On July 20, 2021, The Sun reported that the TV personality quietly divorced Alexandra and is now engaged to longtime boyfriend, Jeremy Scheuch.

Danielle is best known for starring on American Pickers.

Back in August, she took to Instagram to share a photo with Mike as the pair smiled for the camera.

After praising Mike for how he “handled the last 12 years,” Danielle wrote in the caption: “I’m truly saddened for the loss of Frank on the show. I’m incredibly sad for his struggles.

“I have personally watched everything over the last decade. I have many thoughts but won’t speak them as they are only my my thoughts, not gospel.”

She continued: “I wish things could have been different but we must be accountable for our actions when we cause instability or pain and suffering to others.

“Frank caused so much pain for himself that it has been hard to watch. I truly hope Frank receives all the help he needs to become well after years of being unwell.

“It is not my place to speak Ill of someone who needs help so I will keep my comments uplifting. I’m sending love to everyone…”

Frank previously stepped away from the show to recover from back surgery with his last episode airing in March 2020.

The Sun reported the reality star lost 65 pounds after living a healthier lifestyle and remaining sober from alcohol.

Back in July, Mike shared with fans that Frank would not be returning to American Pickers, explaining: “… I will miss Frank, just like all of you, and I pray for the very best and all good things for him on the next part of his journey.”