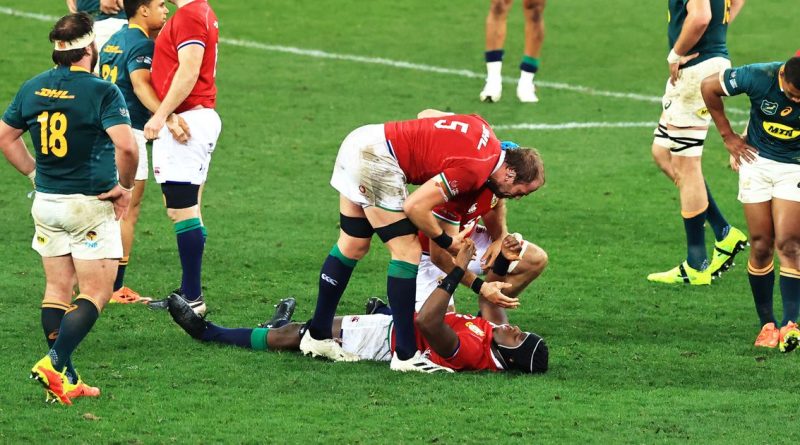 There was a moment, as the heat of battled intensified in Cape Town, that Alun Wyn Jones was pictured amongst a pile of bodies on the turf.

With a Springbok arm around his chest, the Welshman is looking up at his counterpart with a glint in his eye.

Those are the moments he lives for.

Behind him, Courtney Lawes looked almost stunned as he took a moment to collect himself after a brief stoppage in what was a gruelling encounter.

In a brutal, bruising first Test against the typically physical Springboks, it was Lawes and Jones who epitomised the Lions’ spirit to come from behind after a miserable first-half.

Beyond just a crucial victory in the first Test, the pair helped symbolise what the Lions means and why, amid the ongoing political grappling within the game, the historic side will be here to stay.

When the Lions went to New Zealand for their last tour in 2017, all the talk was regarding whether the institution had a future with clubs and governing bodies placing a growing squeeze on its place as part of the global calendar.

Four years on, the same doubts remain, along with the added complication of a tour without fans – such a huge part of the Lions culture – and with players also bound by serious restrictions due to coronavirus protocols.

Players and their families have had to make plenty of sacrifices in order to keep playing rugby over the past 18 months.

Factor in the nature of the tour, the hoops they must jump through and protocols they must meet, and players could be forgiven for having reservations about a trip lacking key aspects.

But Lawes and Jones showcased in Cape Town, in a game most predicted they would never make, what has never been in doubt – the Lions is the pinnacle.

And, for British and Irish players, it always will be.

Lawes had played just four games for Northampton last season when he was named in Warren Gatland’s squad, by all accounts the extra 37th man picked by the New Zealander.

After being selected, Lawes admitted he felt fortunate, but went on to outline his desire to push for a starting spot in the Test team having only been used as a replacement in New Zealand four years ago.

Under the bright lights and empty stands of Cape Town, Lawes finally got his moment and rose to the occasion with a mammoth display, showing little signs of the fact he has battled with his body throughout the campaign.

“It’s going to be a huge physical competition,” he stressed ahead of the tour. “Everyone knows what they’re about, what they’re going to throw at you.

“We have to be prepared mentally for that kind of physical battle and be prepared to put our bodies on the line.”

Put their bodies on the line they certainly did, not that there was ever any doubt whilst wearing a Lions jersey.

But behind the scenes of those 80 minutes, Lawes has worked tooth and nail to get his body into a position to not only survive a Lions tour, but thrive.

If Lawes was fortunate to make the tour, Jones’ inclusion was miraculous.

Much has been made of his rapid recovery from a dislocated shoulder suffered in their first game against Japan at Murrayfield less than a month ago.

Yet here he was, 35-years-old, powering through a full 80 minutes, ice cool as captain in the heat of battle and leading by example.

“To be here now and taking the knocks and bumps and being in amongst it with the group, it means more, I’m not going to lie,” Jones said ahead of the first Test.

At the conclusion of the win, he was asked to sum up the emotions of his rollercoaster journey.

A man typically not of many words, he simply replied: “I wish I could to be honest with you.”

But his follow-up summed up what those involved all already know – that anyone within the game would work overtime to be involved in a Lions summer.

“I worked hard to be back to be part of this, as I’m sure any of them would’ve done the same,” he added. “Today is special, obviously.”

Lions tours only come around every four years.

Those involved, dating back to the historic first tour of 1888, all share the same sentiment – it is an honour which cannot be topped.

There were times when few would’ve expected Lawes or Jones to be in contention, but they did everything physically within their power to defy the odds and shine in the opening Test.

When the initial squad was named without including Kyle Sinckler, his emotional interview after a man of the match display for Bristol went viral.

“It means so much to me,” Sinckler said, fighting back the tears on BT Sport.

A month later, called up as a replacement for the injured Andrew Porter, he won the Lions a crucial scrum penalty to help turn the tide and win the opening game.

Josh Adams was left out of the starting line-up for the first Test after a whirlwind few weeks. He watched his wife give birth over Zoom whilst his team-mates played a warm-up match.

Adams is living proof that when the chance to play for the Lions arises, everything takes a backseat.

Amid speculation that the Lions’ days could be numbered a few years ago, Irish icon Brian O’Driscoll told The Telegraph: “It’s a special thing.

“And it shouldn’t work. But it does, because of the buy-in.”

Lawes, Jones and the colossal performance of the Lions in the face of the obstacles in their way epitomised in Cape Town that the “buy-in” is nowhere near dropping off.

In a rugby landscape of growing complications and pressure from all angles, the magic of the Lions shows no signs of fading from those who matter most – the players.

Stripped back to the bare bones, without any fans, the Cape Town test showed the Lions jersey continues to evoke a different kind of togetherness and spirit.

As long as that power continues to stand the test of times, it is hard to see how the games’ decision makers could find a way to make the Lions go away.