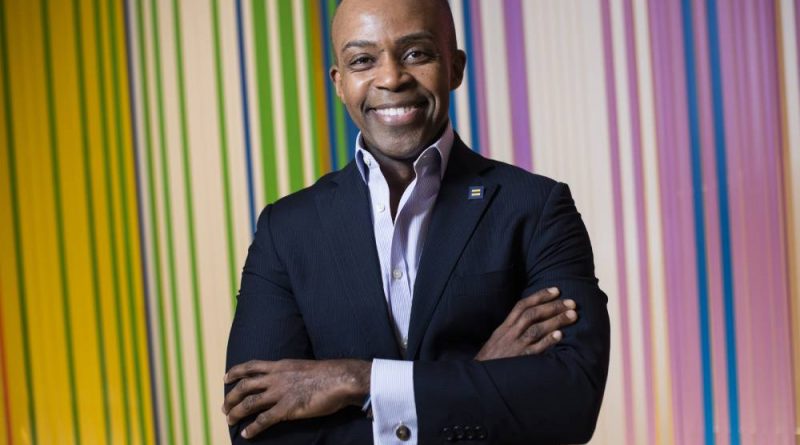 Alphonso David, president of the Human Rights Campaign, is photographed in their office on 12 November 2019. (Tom Williams/CQ-Roll Call, Inc via Getty)

Alphonso David, president of the Human Rights Campaign, said he won’t resign despite being asked to step down because of his former links to ex-governor Andrew Cuomo.

The LGBT+ advocacy group opened an internal investigation into David last month after the New York state attorney general released a report detailing a laundry list of allegations against the former governor, including that he harassed 11 women.

Cuomo, who subsequently resigned, has strenuously denied any wrongdoing. However he accepted “full responsibility” for what he suggested were attempts at affection and humour, in a speech that was widely criticised.

David, who was previously a counsellor to Cuomo, was accused in the report of being party to Cuomo’s alleged cover-up.

According to the HRC statement at the time, its investigation would look into David’s connection to the claims against Cuomo and whether his actions “aligned with the HRC’s mission and values, as well as with professional and ethics standards”.

Amid calls for his resignation, on Sunday (5 September), Alphonso David said in a statement on Twitter that he would not be stepping down from his role as HRC president. He also claimed the investigation into his role in the Cuomo scandal has concluded and found no wrongdoing on his part.

“I have now been privately contacted by the two co-chairs of the HRC board and their representatives, who informed me verbally that the review period has been completed, and that there is no indication of wrongdoing on my part,” David wrote.

He continued: “Despite this, they told me that the results of the independent review will not be shared with anyone – not me, and not the HRC community.

“It isn’t even clear from our conversations that a formal report actually exists.

“Despite the lack of any findings, the board co-chairs have now asked me to consider resigning, not because of any wrongdoing, but because they feel the incident has been a ‘distraction’ for the organisation.”

David said the board chairs decided this based on concerns from two funders and a “handful of employees” who contacted them in recent weeks. He claimed the chairs wanted to “resolve the matter quietly” over the holiday weekend in the US.

David alleged this timing was important because it fell within the “30-day deadline for the review” and could mean there would be “less media interest during this time”.

“I have the support of too many of our employees, board members and stakeholders to walk away quietly into the night,” David wrote. “I am not resigning.”

He said the “idea that this is a distraction is simply not right” and that neither he nor his colleagues at the HRC have been “distracted” while “fighting for human rights”. Instead, he alleged that the real distraction “would be calling for my resignation without providing the results of the review”.

He called for “complete transparency in this matter” by making the full findings from the independent investigation public and “providing me the opportunity to review those findings with the board”.

According to the New York state attorney general’s investigative report, David was consulted over a letter Cuomo staff drafted to discredit his first accuser, ex-aide Lindsey Boylan. This letter was never published.

After David’s comments on Twitter, Boylan said the HRC boss hadn’t “taken any responsibility” for his role advising Cuomo.

“I’d literally walk away and hope the best for you [Alphonso David] if you could simply show a sliver of accountability, a shred of truth,” she wrote. “Instead, we are both stuck here, and it sucks.”