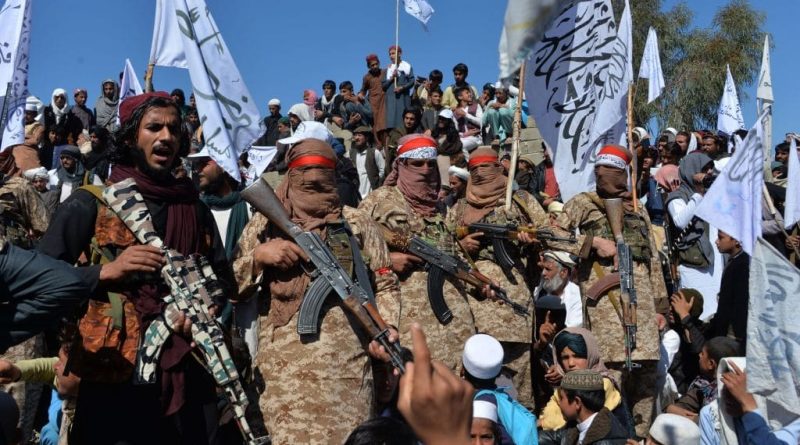 Afghan Taliban militants and villagers attend a gathering as they celebrate the peace deal and their victory in the Afghan conflict on US in Afghanistan. (NOORULLAH SHIRZADA/AFP via Getty)

A group of LGBT+ Afghans have been evacuated from Taliban-controlled Afghanistan and resettled in the UK as part of a government initiative.

Human rights groups have expressed significant concern for the safety and wellbeing of LGBT+ people in Afghanistan ever since the Taliban seized power in August. Activists have been calling on governments across the world to help bring LGBT+ Afghans to safety.

Some 29 LGBT+ Afghans have now been evacuated from the country and relocated to the UK following interventions from the Foreign Office, LGBT+ rights charity Stonewall and asylum group Rainbow Railroad.

The group of 29 LGBT+ Afghans arrived into the UK on Friday (29 October), according to the Foreign, Commonwealth and Development Office.

The department said the group of LGBT+ Afghans will be the first of many who will be welcomed to the UK where they can start a new life free from Taliban rule.

Students and activists who have stood up for LGBT+ rights in Afghanistan are among those who were evacuated.

“Britain is a fierce champion of freedom and the right of all people to be themselves and love who they want free from persecution,” foreign secretary Liz Truss said in a statement.

“We played a key role getting these people out and will continue to do all we can to help at-risk Afghans leave the country.”

Kimahli Powell, executive director of Rainbow Railroad, said they have been working tirelessly since the fall of Kabul to relocate LGBT+ Afghans to safer territories.

“Rainbow Railroad is thankful for the strong advocacy of Stonewall UK and for the UK government, which helped facilitate the arrival of these LGBTQI+ persons. This is just the beginning of our efforts to help hundreds of LGBTQI+ individuals we are supporting in Afghanistan relocate to safety.

“We look forward to continuing to work with the UK government and other governments ready to follow their lead to help Afghans at risk.”

Nancy Kelley, CEO of Stonewall, said the group was “proud” that their campaigning had resulted in the first group of LGBT+ Afghans being relocated to the UK.

“However, our work is not yet done,” she said. “We will continue advocating for international support for LGBTQ+ Afghans, including those that remain in Afghanistan, and we will also continue to work with the UK government to ensure that the LGBTQ+ Afghans who arrive in the UK are given the support they need to thrive.”

Numerous LGBT+ Afghans have shared their experiences living under Taliban rule since the extremist militant group seized power in August.

One gay man called Sohil told PinkNews that he was burned with scalding hot water by a Taliban member when he went to a government office in a bid to get a passport.

“I don’t know what to do. I hoped that our LGBT+ community will help us, but there is no one standing for us. I used to stand for my guys in Afghanistan, now I want them to stand for us.”