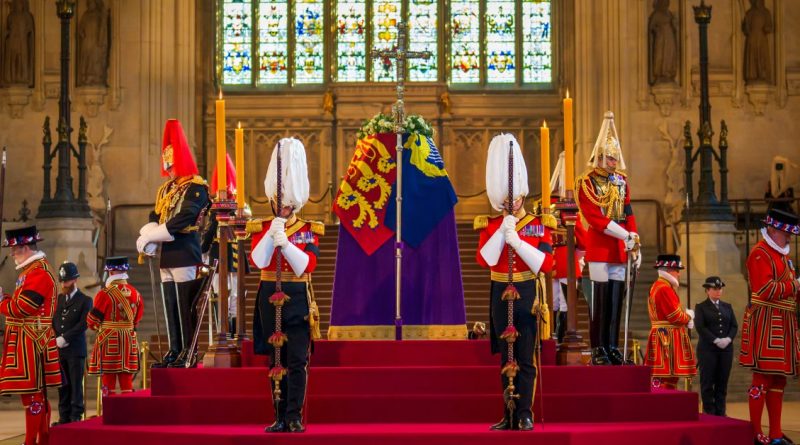 
Queen Elizabeth II, who died last week at the age of 96, is set to be buried at St. George’s Chapel within the grounds of Windsor Castle, one of the late Queen’s favorite homes and where many royals have been laid to rest before her.

After her funeral at Westminster Abbey on Sept. 19, the Queen’s coffin will be transferred to Windsor Castle, which is about 20 miles outside of Central London. The Queen will be buried there as part of a long history of burials at the site, including 10 former sovereigns.

Read More: Queen Elizabeth II’s Death Is a Chance to Examine the Present-Day Effects of Britain’s Colonial Past

St. George’s chapel has several sections and nooks, including the King George VI Memorial Chapel, which the Queen commissioned after her father’s death. The Queen will be buried in the memorial chapel alongside her parents, King George VI and Queen Elizabeth, and her sister, Princess Margaret. Twenty four members of the royal family are buried at St. George’s Chapel, including several members laid to rest in the Royal Vault.

St. George’s Chapel has a long history for the royal family, not just as a burial site, but as a location for weddings, christenings and funerals. Prince Philip’s funeral was held there in 2021, and Prince Harry and Meghan Markle were married there in 2018.

Construction of the chapel first began in 1475 under King Edward IV’s reign and was completed in 1528 under King Henry VIII. Today, the chapel is a designated place of worship for the royal family, as well as a church that serves the local community.

“Built by kings, shaped by the history of the Royal Family and still the location for both splendid Royal events and private family moments,” Buckingham Palace says about the significance of St. George’s Chapel.

Following the Queen’s funeral, a royal procession will transport the Queen’s coffin to the chapel. The procession will likely include King Charles III and other senior members of the royal family. The Queen’s late husband Prince Philip, who was buried in the Royal Vault after his death, is expected to be moved to the memorial chapel to lie next to the Queen, but royal officials have yet to confirm this.

Since her death at Balmoral Castle in Scotland, the longest-reigning British monarch’s remains have gone through a series of processions at Edinburgh, Buckingham Palace and Westminster, following royal custom.The Queen’s coffin will have journeyed more than 500 miles before finally reaching Windsor.

Later that evening, there will be a private burial service for family at the memorial chapel. King George VI’s remains were buried there in 1969, and he was later joined by Queen Elizabeth and Princess Margaret who both died in 2002.

St. George’s Chapel is open to the public for several days each week and anyone wishing to pay their respects to the Queen will be able to once her burial is concluded.