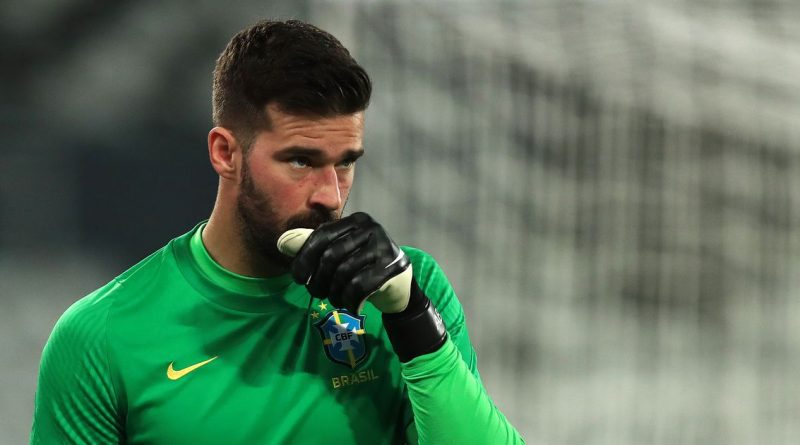 Alisson was left on the bench for Brazil’s final game of the international break after coach Tite refused to release any of his nine Premier League stars early.

The Liverpool No 1 was overlooked for the 4-1 win over Uruguay with Ederson starting in between the sticks.

Even before the win Brazil were all but guaranteed to make the World Cup in Qatar next year.

Nevertheless, their host of top flight stars were all required to stay meaning many won’t feature this weekend.

Brazil’s game kicked off at 1.30am on Friday morning UK time giving them a tight turnaround before this weekend’s round of Premier League games.

Clubs were reportedly coming together to charter a plane to bring all the players back with Man Utd, Liverpool, Man City, Leeds, Aston Villa and Chelsea all joining forces.

Alisson’s snub will no doubt come as a frustration given he will likely miss Saturday’s lunchtime kick-off at Watford.

The Hornets have denied Liverpool’s request to push the game back several hours.

Fabinho has confirmed that the Reds are now looking into whether they should fly their duo straight to Spain ahead of next week’s Champions League clash with Atletico Madrid.

He said: “I believe the match against Watford will be very hard for us to play. With all of what is involved, ­including travel, I don’t know how much time we will have between one game and the other.

“We will also need to quarantine, but the club is still studying whether it is better to go straight to Spain to play Atletico and quarantine there, without staying in a hotel in England.”

Leeds star Raphinha stole the show for Brazil, scoring two of their four, but is likely to miss their game at Southampton on Saturday.

They, as well as both Manchester clubs and Villa, are all 3pm kick-offs on Saturday.

Chelsea meanwhile play Brentford at 5.30pm giving Thiago Silva more time to recover and he could play, although that still remains unlikely.

In total seven Premier League players started in Brazil’s win over Uruguay, with Gabriel Jesus, Edinson Cavani and Fred also among them.

As per a recent agreement players are allowed to train and play if they return from a red list country but must quarantine for 10 days outside of that.

If Liverpool do send Alisson and Fabinho direct to Spain then they will be able to avoid their 10-day hotel ­quarantine in the UK.