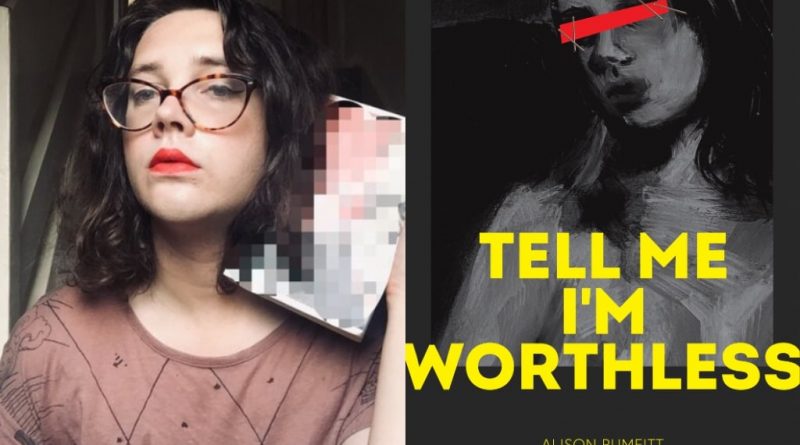 Alison Rumfitt, author of Tell Me I’m Worthless (L) and the cover of her debut novel (R). (Cipher Press)

It’s official – the UK’s virulent transphobia has become so severe that it’s now the subject of a horror novel.

Tell Me I’m Worthless by Alison Rumfitt is, in many ways, a straightforward horror novel: on the surface, it’s a gruesome haunted house story about three friends whose lives are torn apart by a mysterious presence.

But Tell Me I’m Worthless is so much more than that. Rumfitt’s deeply unsettling story also explores the wave of transphobia that has been engulfing Britain for years, delving into the rise of fascism, Britain’s terrifying lurch to the right and the scourge of racism.

At the centre of the novel is the complicated relationship between Alice, a young trans woman, and Ila, a “gender critical” feminist who has become embroiled within the UK’s anti-trans movement.

“I’m interested in radicalisation and the effects of right wing politics, so I think it made sense that something as obviously conservative as a haunted house – a house that is maintaining the past so much that it is literally breaking the foundations of life and death – it made sense to me that that could be an effective framework for exploring right-wing politics,” Rumfitt says.

Alison Rumfitt speaks to PinkNews about eviscerating social media, why Britain is a cesspit, and what the future holds for TERF island.

PinkNews: Why is the horror genre a suitable place to tackle issues like fascism and transphobia?

Alison Rumfitt: The really basic answer is: these things are horrible. It just makes sense to me – I don’t have to push things too much further to make them into actual, all-out horror. I find it scary so I wanted to write a novel where those things were scary to the general reader.

This is a novel, certainly first and foremost, I was writing for trans audiences. But I would hope that it’s also scary and interesting and enlightening to people who aren’t trans. That’s just the way I work – I try to prioritise our audience. There are particular interests in specific corners of horror within trans communities – we have particular interest in body horror. This is a book where things happen to people’s bodies that they can’t control that are quite upsetting.

I’ve always read into a lot of horrific things that I like, even if they don’t have subtext. I’ve always read into The Shining film and thought, that’s about racism, or I can look at The Exorcist and think, this is about some TERF parents whose child is showing signs of gender dysphoria and they’re freaking out and calling the Catholic police or whatever. So I was just trying to do that and make that stuff textual rather than me projecting subtext onto it.

The haunted house in Tell Me I’m Worthless is almost like a character of its own. What references did you look to in creating the house?

I’m a writer who writes a lot in references and intertextuality but hopefully that still works if you don’t know the references. Hill House is sort of, I think, the most perfect haunted house in literature. It’s so vivid and the characters in that novel are so vivid as well, so that was a big reference point. There’s a book called White is for Witching by Helen Oyeyemi – that has wonderful sections written from the perspective of this house. I had that in mind but I also wanted to make sure I wasn’t just doing what Helen did because I think she writes in a really unique way.

There are parts from the perspective of the house, but they’re not first person narration. I’m not sure I would have liked to write it that way because of what the house represents. I wanted to keep a distance. There are obviously references to speeches by fascists, there’s references to Oswald Mosley (the former leader of the British Union of Fascists), and the “rivers of blood” speech by Enoch Powell. So it does speak in those ways, but if there were sections just from its point of view that would have been too much.

The house is called Albion, which is an old name for Britain. What was the meaning behind that?

This was in my head because one of the last big things I did before lockdown was I went to a William Blake exhibition in London, and Albion is such a recurring character and concept within William Blake’s writing. I love William Blake, he’s a really interesting artist and writer to use to think about England and the changing perspectives of what England is. I think by using the name I was trying to imply a lot of history, going as far back as it’s possible to go into the roots of the country. The real horror is that the rot goes all the way down to the roots.

That really hit me reading it, the idea that this rot in Britain is by no means something new.

Because of the nature of how messed up the UK is, things would just be constantly developing as I was writing it, so I’d finish a draft and then suddenly there were the horrible right-wing arguments about Black Lives Matter protesters trying to censor statues, and then there were prosecutions against people involved in that. So when I did another draft I had to have that in mind, and once I finished that, more stuff happened – it kept happening! So it developed naturally because every time I would look online there would be something else.

The novel deals brilliantly with the idea of Britain today being a bit of a cesspit – how did you weave themes transphobia through?

Originally I wasn’t going to write so explicitly about gender criticals because I’d just put out this long poem about gender criticals and gender essentialism, and honestly, I wasn’t sure if me writing about it was doing any good. And then suddenly I realised that one of the primary characters of the novel needed to be – for want of a phrase that wouldn’t get me attacked – a TERF.

It was interesting to write a TERF character because I haven’t really read any books that have TERF characters, especially not books by trans people. And it’s so much a part of modern discourse in this country that it’s kind of strange that it’s gone so unexplored.

Ila is such an interesting, flawed character – the reader almost roots for her at times. What was it like for you exploring her psyche?

The thing I enjoyed was getting into the headspace of someone who, if they met me on the street, would probably hate me. I was trying to build a psyche of someone like that and work out if there was a way that I could still empathise with them. It’s kind of telling that Ila doesn’t ever quite feel like she is with the gender critical movement all the way. I don’t know if I could have written an unrepentant TERF with no point of origin of their bigotry. It was an experiment but it was an experiment I really relished.

The book also comes with a content warning, which was really refreshing. What was the reasoning behind putting that in there?

My general opinion is that authors should certainly consider including content warnings if they’re dealing with subjects that might be upsetting. But I really don’t want them to be mandated in any way – it should be up to the author. It’s a good idea if the author writes it out if they want it, rather than it coming from the publishing house.

The book doesn’t have a very optimistic outlook for the future of Britain. Where do you think the country is headed?

My next novel is about that, so I can’t say too much. But I imagine it’s sort of clear. I don’t have an optimistic outlook. I don’t mean to be a doomer or anything like that, but the Overton window [the window of current political possibilities] doesn’t at all include left-wing ideas. I think it’s shifting even more and it’s narrowing even more. A lot of people who are in positions of power who could maybe do something about that are not doing it for whatever reason – maybe they see financial gain from it, maybe they see social gain from it, or maybe they just don’t really care about the people affected.

I don’t have a great outlook but the sliver of hope, if there is one, is seeing the renewed vigour around protest. We haven’t quite gotten to the point where it lasts for an extended period of time, but there certainly is still passion there.

Tell Me I’m Worthless also explores issues around social media, particularly with Twitter. Does it echo your own views of social media?

People have lots of different experiences of the internet. My experience is very much informed by being a trans woman online, a trans woman on Twitter especially. I don’t have a great view of Twitter – I go in for it, too. It’s a very easy place to end up in these death spirals of utterly pointless arguments.

Hopefully the tweets that are in the novel feel like real tweets and you can imagine coming across them on your timeline. There’s a bit where someone calls out a character for using the ’T’ slur on them, but they write out the word or they put an asterisks in it, and someone else tries to call them out for using that word as well, and it was just a really fun Russian doll of discourse.

Twitter isn’t the only website in the book – there are also sequences talking about 4Chan and Tumblr and Mumsnet. The Mumsnet stuff was really fun to write. Obviously it’s horrible, but there’s something about the twee, middle-class white woman phrasing they use on there that’s just hilariously slimy. Different websites have different languages so it’s fun to try and reproduce those languages.

Tell Me I’m Worthless by Alison Rumfitt is published by Cipher Press on 28 October.