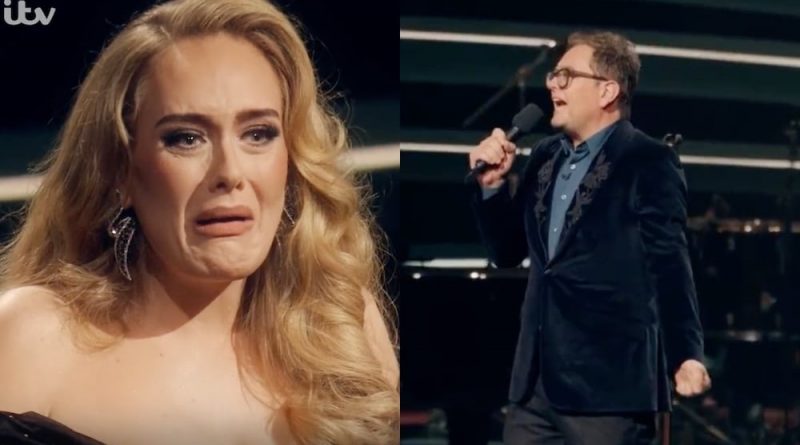 Alan Carr stepped in after Adele broke down in tears. (ITV)

Alan Carr was forced to step in and entertain the audience during ITV’s An Audience With Adele when the singer broke down in tears after reuniting with her childhood English teacher.

An Audience With Adele aired on 21 November, and saw Adele perform classic tracks as well as songs from her new album 30.

Emma Thompson is such a MOOD #Adele pic.twitter.com/5VeQlbop7z

At one point, Thompson stood up to ask Adele if she had been “supported” and “inspired” by a particular person when she was younger.

Adele said that her English teacher, Miss McDonald at Chestnut Grove school in Balham, was “so bloody cool, so engaging”, and added: “She really made us care and we knew that she cared about us.”

Thompson then revealed that the teacher was actually in the audience, prompting Adele to immediately burst into tears.

During the emotional reunion, Adele told the teacher that she “changed her life”, and tearfully joked that she would need to have her makeup redone.

After the teacher left the stage, Adele called on friend Alan Carr to take the reins while she composed herself. She told the band: “Play ‘Make You Feel My Love’ and get Alan to sing it.”

Carr’s screeching rendition had the audience in hysterical laughter, and on her return, Adele said: “Now that’s a true friend.”

We all have that one teacher who changed our life… such a beautiful reunion! ❤️

Viewers were delighted by the “chaotic” ITV special, which followed a US special – Adele One Night Only – on CBS earlier this month.

Theatre producer Ric Watts wrote on Twitter: “I’m loving how low key chaotic the British Adele special is compared to the US one.

“Who needs a Hollywood sunset when you can have Alan Carr filling in while her make up gets touched up following an emotional ambush via a drunk Emma Thompson?”

I’m loving how low key chaotic the British Adele special is compared to the US one. Who needs a Hollywood sunset when you can have Alan Carr filling in while her make up gets touched up following an emotional ambush via a drunk Emma Thompson.

I love everything about this moment 😂 Get yourself a friendship like Adele and Alan Carr’s pic.twitter.com/ExoZv5azWB

Another Twitter user wrote: “If Alan Carr getting up to sing “Make You Feel My Love” while Adele gets her makeup fixed doesn’t describe British culture, I dunno what will.”