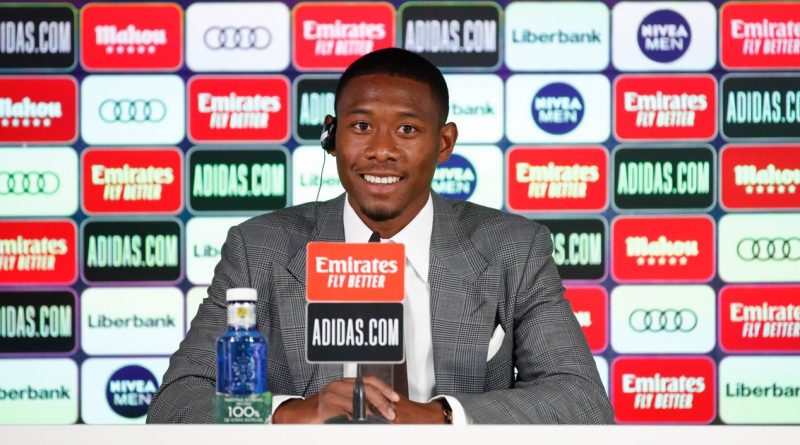 David Alaba’s Real Madrid contract has been leaked – showing just how lucrative his contract at the Bernabeu really is.

Los Blancos confirmed the signing of Alaba in May after his Bayern Munich contract expired.

Alaba, 29, was a serial winner in Germany as part of an utterly dominant Bayern side, claiming 10 Bundesliga titles and two Champions League crowns.

But he joins Real Madrid with a challenge of spearheading a new look defence after the exits of club greats Sergio Ramos and Raphael Varane.

Ramos and Varane have been permanent fixtures in Real’s side over a number of years, but left for Paris Saint-Germain and Manchester United respectively this summer.

Players who sign for their new club on a free transfer are often rewarded with large salaries.

And it has been disclosed that Alaba will be paid extremely handsomely for his endeavours in the famous white shirt.

Alaba’s leaked contract in Der Spiegel shows he will earn nearly £100m across a five-year contract in the Spanish capital.

He will take home a staggering £376,000 per-week in wages, which equates to £98m over the five-year period.

Alaba was also rewarded with a £15.1m signing on fee, while his agent Pini Zahavi earned £4.4m for his work in the transfer.

And his father also benefits from the mega move, with his dad George receiving a further £5.4m without a specified reason.

Will Real Madrid win La Liga next season? Let us know in the comments below

Club president Florentino Perez talked up the talents of Alaba during his belated unveiling last month.

“Whenever great players arrive, Madridistas have special enthusiasm,” he said.

“The arrival of this magnificent player coincides with a great era with the return of Ancelotti. We want our fans to be proud of our team.

He continued: “I want to thank you for choosing Madrid. You come from one of the great clubs in the world, a friendly club in which you have won 28 titles. You are one of the great legends of Bayern.

“You arrive in Madrid with the highest recognition in the world of football.

“You now face an exciting challenge, to add titles with Madrid and be part of the history of our club.”