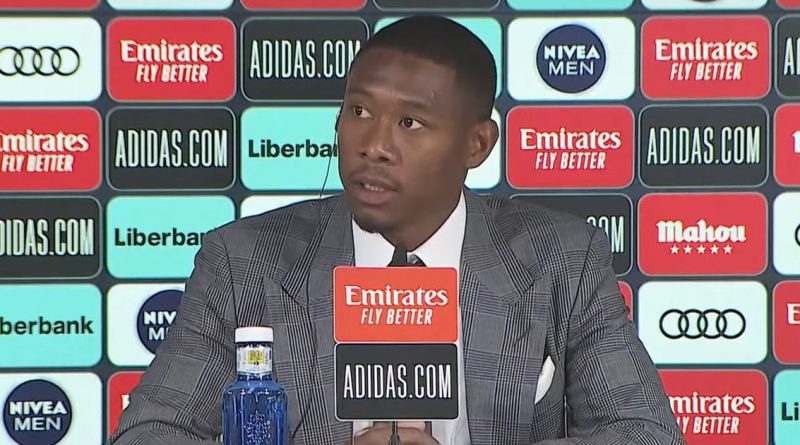 David Alaba’s plea to have the chance to play with Raphael Varane has fallen on deaf ears after the Frenchman agreed personal terms with Manchester United.

The 28-year-old is set to move to Old Trafford for £34million, leaving the newly-arrived Austrian without a world-class defensive partner at the Santiago Bernabeu.

Alaba left Bayern Munich after nine years to join Real for free upon the expiration of his contract in Germany.

It was then when Varane began to be heavily linked with a move to the Red Devils, with his Madrid deal expiring next summer and the Frenchman seeking a new challenge.

Ole Gunnar Solskjaer’s side are set to take the four-time Champions League and one-time World Cup winner and deny the incoming Los Blancos man his wish.

Alaba was speaking at his Real Madrid unveiling, where he outlined his desire to play alongside the French centre-back.

“Of course I would love to play with Varane,” he said upon signing a reported mega £10.5million-a-year deal.

“For many years he has played excellent football and not just now.

“He is a wonderful defender and has great qualities.”

Alaba has been handed the No.4 jersey that Sergio Ramos wore before leaving after 16 years in the Spanish capital.

Likely to weigh heavy, the versatile left-footer is keen to make his own history wearing in the number.

“They only had this number available but I know what this number means for the club,” stated the 29-year-old.

“For me, it’s an honour to wear it. I want to honour this number. It really motivates me.

“It’s a number that represents strength and leadership.”

Ramos’ emotional departure from the Bernabeu ended a trophy-laden spell and Varane’s impending departure means Carlo Ancelotti’s side have a gaping defensive hole but Alaba is confident of shoring up the rearguard.

Are Man Utd Premier League title contenders with the signing of Varane? Give us your prediction for the top four.

“I want to bring my qualities to this team. I’m a versatile player. I can play in different positions.

“Ramos has been here more than a decade and has played great football and is a leader,” he added.

“We all know that. It would have been a pleasure to have played with him.”

Ex-Everton boss Ancelotti worked with Alaba in Munich and after hastily leaving Goodison Park at the end of the season to return to the La Liga.

The Italian will reunite with the former Bayern man following their term together in 2016-17.

However, the new number four’s switch came as Zinedine Zidane left the club for a second time.

“I was saddened that Zidane left the club but on the other hand, I was very happy that Ancelotti took over,” he said.

“We have an excellent relationship, having worked with him at Bayern.”