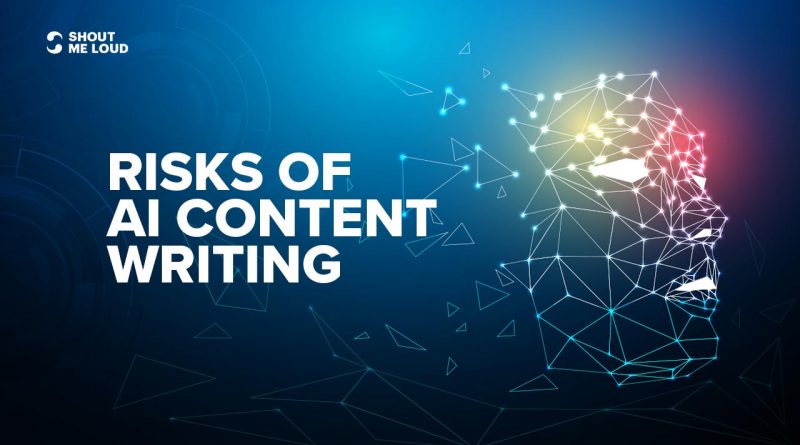 
When we talk about the risks of using AI, we usually think of scenes from movies like A Space Odyssey or The Terminator, where robots turn against humans. While the consequences are significant, they’re far less dramatic than the dystopian future often portrayed in movies. The risks are much more nuanced and subtle, and many people fail to recognize them until it is too late.

Recently, AI-assisted writing has been hailed as a way to create content faster, but hardly anyone talks about the risks involved. When companies like Open AI commercialized AI text generation, it also intensified the risk landscape.

Sure, AI opens up fantastic content marketing opportunities, but it’s also fraught with risks. And as with any new technology, you have two camps with conflicting reactions — the overzealous early adopters ignoring the pitfalls and the risk-averse laggards fiercely protesting it for fear of change.

So what’s the best approach?

I think the sweet spot is somewhere in the middle.

Good business leaders understand that these challenges are part of embracing transformative technologies.

It’s a mindset shift from fearing the risks to managing them.

To manage the risks, you need to understand them first. So let’s explore the potential downsides of using AI to write content.

1. The risk of making irresponsible claims

Irresponsible claims that you can’t back up with proof can result in heavy fines and penalties in regulated industries.

For example, if your product claims to cure cancer, and it doesn’t, you could face legal action and pay some hefty fines.

Activia yogurt, a famous brand from Dannon, claimed it is “clinically” and “scientifically” proven to regulate digestion and boost immune systems. However, the company had no facts to back up its claim, resulting in a $45 million fine in 2010. Source

New Balance had to pay $2.3 million in a settlement after being accused of false advertisement in 2011. They claimed that their shoes helped wearers burn calories, but studies found no such health benefits. Source

These are instances where humans signed off on the advertising claims. The risks are even higher if you’re using an AI writer without taking steps to fact-check your claims. So if you’re using AI to write ads for you, make sure to review the copy before publishing it.

Mitigation strategy: Get your legal team or seniors to review your content.

2. The risk of watered-down brand voice

Your brand voice is what makes your company unique. It’s how you communicate with your audience consistently across all channels.

If you’re using unedited AI copy, there’s a risk that your brand voice will become diluted or lost altogether.

Here are two versions of the same message. One is more warm and friendly, while the other is more formal and corporate.

We’re stoked to announce the launch of our brand-spankin’ new meditation app. It’s designed to improve your mental health and overall well-being. You can listen to guided meditations, watch bite-sized training videos, read articles, and even book sessions with licensed therapists—all on the go.

We’re rolling it out in phases. First, to colleagues in the UK and US, then everybody else. We’re here for you if you have any questions.

Download the app today to get started on your journey to a happier and healthier you!

We are proud to announce the launch of our new meditation app. You can now access guided meditations, bite-sized training videos, read articles and consult with professional therapists.

In the first phase, the app will be made available to US and UK colleagues, then subsequently to other countries. Do not hesitate to contact us if you have any questions or comments.

Many AI content generators have an option to specify the tone of voice when generating copy. But AI can veer off course if you don’t carefully review the output.

Mitigation strategy: Create a voice guide with real-life examples. Show what good and bad look like.

3. The risk of unintentional plagiarism

Another risk is plagiarism. Studies done by Guardian reported 2,278 cases of plagiarism in 2016-2017. With the rise in AI content writing tools, I’d expect the numbers to go up because they’re often marketed as 100 percent plagiarism-free content. Companies offering these tools should step up and educate users on the risks and ethics if they want to build a sustainable business.

However, the risk of plagiarism varies depending on the AI model you’re using. In most cases, language models like GPT-3 create original text, but I’ve encountered instances where they regurgitate information from the internet verbatim.

Of course, isolated cases of plagiarism don’t make the tool unusable, but it’s crucial to understand the risk so you know how to avoid it.

Mitigation strategy: Run your work through a plagiarism checker.

Moravec’s Paradox says that it’s easy for AI to learn things that are hard for humans, like mathematics and logic. But it’s hard for them to understand things like empathy and emotions that humans find easy. Emotions are hard to teach because we don’t have logical steps to explain feelings and how we perceive the world.

Since AI doesn’t understand empathy, AI-generated content might lack sensitivity. So using AI tools in situations where context and empathy are crucial is a high-risk decision.

In his book Heartificial Empathy, Minter Dial explores coding empathy into AI. It’s an interesting take and might even be possible in the future, but I think we’re still a long way off, given that humans haven’t cracked the code to empathy yet.

Mitigation strategy: Develop an internal decision framework to assess the risk of using AI in different scenarios. Involve your risk management team in the decision process.

Google clearly stated that the webspam team could take action against automated content if it is discovered. While Google spokesperson John Mueller wasn’t clear about Google’s ability to detect AI-generated content, it’s pretty obvious that using AI to generate SEO content will be a cat-and-mouse game. Especially with Google’s helpful content update.

Mitigation strategy: I think the best way to avoid penalties is to use AI as a creative assistant rather than relying on it 100 percent.

Fact-checking should be part of your content workflow regardless of whether you’re using AI or not. But it’s vital when using AI because AI making up facts is one of the biggest risks associated with AI content. Even the best language models, like GPT-3, make mistakes. These errors are hard to spot because they’re often tucked between factual paragraphs.

I asked an AI tool to write a life story about Abraham Lincoln. It gave me the below output:

Lincoln’s father was a farmer and carpenter who was born in Virginia in 1778. His mother, Nancy Hanks Lincoln, was of English and Scots-Irish descent. She died when Abraham was nine years old.

In 1816, Lincoln’s father married Sarah Bush Johnston. Sarah was a widow with three children of her own. She helped her husband to raise Abraham and his brother, Thomas, Jr.

It sounds good, and some of the facts are right. But Lincoln’s parents got married in 1819, and Nancy Hanks Lincoln was American. The incorrect information is easy to miss because a lot of the other information it wrote was accurate.

Here’s another example, I got the below output when using an AI to write a blog post.

In fact, according to a recent study conducted by IBM, only 30% of senior executives believe AI will transform their industry by 2025.

The AI writing tool made up the stats; I couldn’t find any source to validate the numbers.

Mitigation strategy: Research and manually fact-check your content before publishing it.

AI is only as good as the data it’s trained on. If the data is biased, the language model will be too. While most AI models have built-in safeguards to avoid this, biases can always creep in. For example, if the training data is biased or underrepresents a group of people, the model will be biased. That’s why you always need human oversight before publishing any AI content.

Amazon had to scrap its recruiting tool that used artificial intelligence to select candidates after machine learning experts uncovered that the algorithm was biased against women. The data sample used to train the algorithm mainly consisted of male resumes, so the algorithm favored male candidates.

Amazon’s experience is just one example of how AI bias can have real-world consequences. So if you’re using AI content writing tools, ensure safeguards are in place to avoid bias.

Mitigation strategy: Use tools that have taken steps to avoid bias in their language models. You can always ask the provider what steps they’ve taken to avoid discrimination.

AI can’t create new ideas or concepts; it merely emulates the patterns recognized in the training data, so there is a risk of lacking original ideas if you rely entirely on AI for writing.

All of which AI struggles with, at least in its current state. So, if you’re looking to generate thought-provoking content that challenges the status quo, AI is not your best bet.

If you rely entirely on AI to generate your content, you’ll wind up with a lot of text that doesn’t say much. But it can still be a powerful tool for content marketers — especially when coupled with human expertise. So learn to tame the beast, and you’ll be able to create some pretty amazing content.