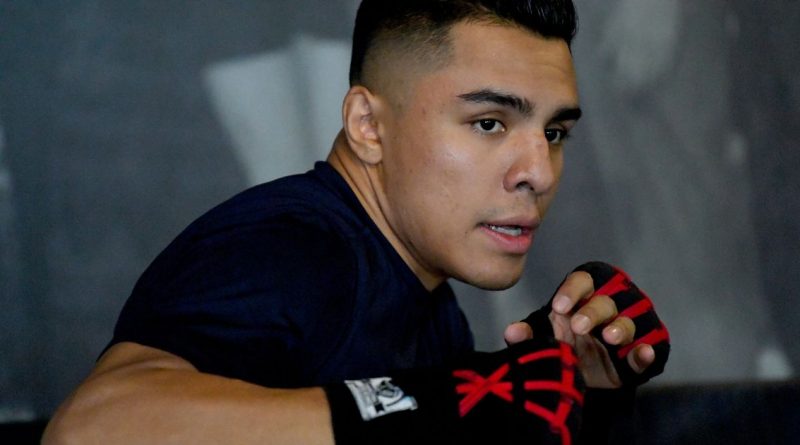 
The Mexican fighter Adrian Granados is left ‘upset and frustrated’ after scheduled welterweight clash with Conor Benn is called off, after Benn tested positive for Covid-19 upon Fight Camp entry

Mexican welterweight Adrian Granados has been left ‘upset and frustrated’ as his fight with British welterweight Conor Benn is postponed after Benn tested positive for Covid-19.

Granados was set to face Benn on the main-event of the first week at Matchroom Boxing’s Fight Camp which will now be shown globally on DAZN after a new broadcasting deal the label signed with the streaming service.

But Benn has been forced to withdraw after testing positive for Covid-19 on a lateral flow test ahead of the contest leaving his opponent ‘frustrated’ but ready to go with any new date.

“I am very disappointed, it is just the day and age we live in now,” Granados said at the press conference after the news.

“Both Conor and I were very gung-ho about the fight, very excited but are very unfortunate with this disease that is conquering the world right now.

“I am very upset and frustrated, but what can you do?”

The fight had received a good amount of hype and anticipation, with Benn seen as an emerging star in the division and some intense chat between the pair with Granados stating he was ready to ‘humble’ the young son of Nigel Benn.

Benn responded with a ‘top boy’ warning for his Mexican opponent, and the experienced welterweight insists he will be ‘ready to go’ and deliver on his words upon any rescheduled date.

“I will always be ready, this is the fight that is supposed to happen,” Granados continued.

“Benn has said a lot of stuff, I just wanted to get it on.

“I will be ready for August 14th, or whatever date may come.”

Benn was set to face another step-up in level in this fight, after making a statement first round stoppage in his last outing against Samuel Vargas back in April.

He also revealed his plans to keep improving and plot a journey to the world title, delivering comparisons to fellow British welterweight Kell Brook in his route to top-level glory.

“Look at Kell Brook he turned pro at 18, and won his first world title when he was 28 including his massive amateur pedigree,” Benn told Mirror Fighting at a media day ahead of Fight Camp.

“It is hard to not put a timeframe on it (world title plans).

“Really I could have done with so many more learning fights during my career.”

The Fight Camp card is set to go ahead despite the withdrawal of Benn with British featherweight Leigh Wood’s world title challenge against Xu Can promoted to main event ahead of the Fight Camp launch at the weekend.

Wood has vowed to ‘unveil a secret weapon’ ahead of the clash against the Chinese champion who has his eyes set on calling out consistently linked rival Josh Warrington after getting the job done on Saturday night.

Benn’s fight is not the first to be called off due to coronavirus with Tyson Fury’s trilogy bout against Deontay Wilder also rescheduled for October after an outbreak of the virus in Fury’s training camp ahead of the planned July contest.