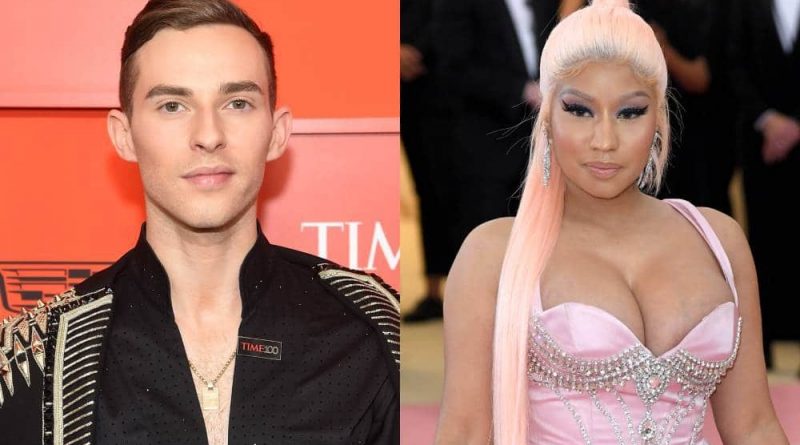 The gay athlete paid tribute to the friend of Minaj’s “cousin in Trinidad” whose “testicles became swollen” and “become impotent” after receiving a dose of the COVID vaccine. Rippon sat in front of a post of the famous rapper with a Minaj t-shirt on, a bandage from a ‘jab’ and some choice swollen-looking bits dangling from his shorts.

Adam Rippon completed the costume with a “COVID-19 vaccination record card” that revealed he got his first dose of the “modernatron shots shots shots” at a clinic site “in a sticky Benz” – which are references to Minaj’s 2019 song “MEGATRON”.

The now infamous tweet came about after Nicki Minaj revealed on 13 September that she didn’t attend the 2021 Met Gala because she declined a COVID vaccine. She explained that she was still doing her “research”.

In a later tweet, she claimed her “cousin in Trinidad” wouldn’t get a jab because “his friend got it and became impotent”, and that his “testicles became swollen” as a result.

My cousin in Trinidad won’t get the vaccine cuz his friend got it & became impotent. His testicles became swollen. His friend was weeks away from getting married, now the girl called off the wedding. So just pray on it & make sure you’re comfortable with ur decision, not bullied

There is currently no evidence to support the claim that the COVID vaccines result in the side effects Minaj claimed in her tweet.

The CDC hasn’t listed impotency or engorged genitals as a side effect and has explicitly stated “there is currently no evidence that any vaccines, including Covid-19 vaccines, cause fertility problems in women or men”.

Dr Anthony Fauci, who serves as chief medical advisor to Joe Biden, also hit back at the claims. When quizzed on if there was any evidence that COVID vaccines cause swelling in the testicles, Fauci said it was “a resounding no”.

“There’s no evidence that it happens nor is there any mechanistic reason to imagine that it would happen,” he declared.

Chris Whitty, the UK’s chief medical officer, also weighed in on the bizarre claims. He declared there are a “number of myths that fly around” about COVID vaccines that are “clearly ridiculous” and “designed just to scare”.

“This happens to be one of them,” he said. “That is untrue.”

He added: “As we stand now, there is absolutely no reported such side effect or adverse event of testicular swelling in Trinidad… and none that we know of anywhere in the world.”

So needless to say, Adam Rippon wins with probably the most topical slash viral-inspired Halloween costume this year.