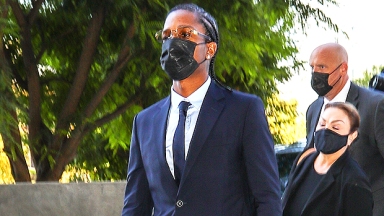 
A$AP Rocky looked ready for court, as he arrived for his hearing in the felony assault case on Wednesday, August 17. Rocky, 33, whose real name is Rakim Mayers, was charged with felony assault with a firearm months after a shooting in November 2021. He sported a dark blue suit and tie, as well as a black face mask, as he arrived for the trial. He pleaded not guilty, according to Entertainment Tonight.

Rocky was arrested after he arrived at LAX, following a trip to Barbados with his girlfriend Rihanna in April. Authorities brought him into custody, and he was later released after putting up the $550,000 for bail. The charges against the “D.M.B.” rapper were formally announced by Los Angeles County District Attorney George Gascón on August 15. Rocky can face up to 14 years in prison for the charges.

The D.A. warned spoke about the charges further in a statement. “Discharging a gun in a public place is a serious offense that could have ended with tragic consequences not only for the person targeted but also for innocent bystanders visiting Hollywood,” he said. “My office conducted a thorough review of the evidence in this case and determined that the addition of a special firearm allegation was warranted.”

The hearing comes just three months after Rocky and Rihanna, 33, welcomed their first child in May, and parenting his newborn son has been a major focus for the At Long Last A$AP star. A source close to his girlfriend revealed to HollywoodLife exclusively that Rihanna has been trying to “remain calm,” but is also worried. “She’s feeling anxious and wishes this whole thing would be over already. She feels like their son needs his father to be present in his life and isn’t ready to imagine what their future potentially looks like at this point if Rocky has to go away. She’s doing her best to stay strong for herself and Rocky, and just wants the best for her baby,” the insider said.