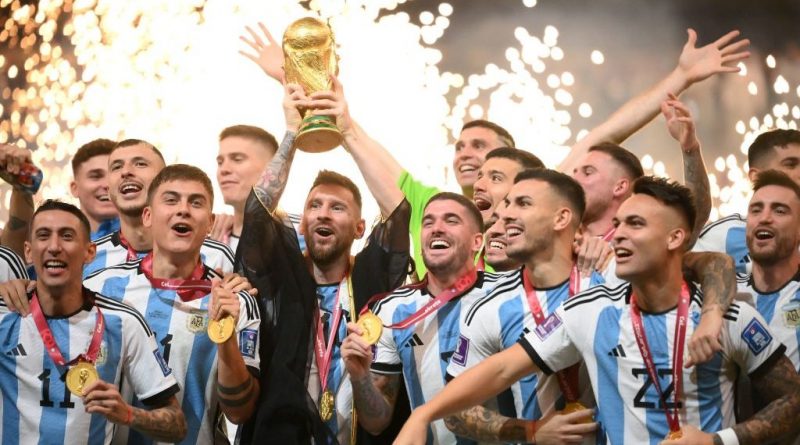 
This was Lionel Messi’s World Cup tournament, the whole way through. On Sunday, however, his superstar counterpart for France, Kylian Mbappé, did everything he possibly could to deny the greatest player of his generation his elusive first World Cup title.

But in the end, not even a Mbappé hat trick, in perhaps the most dramatic and heart-stopping soccer game in human history, could thwart Messi’s magic.

Messi scored a pair of goals in a final that will be discussed and celebrated for decades, as Argentina defeated France in a 4-2 penalty shootout, after extra time ended in an unbelievable 3-3 tie. The victory gave Argentina the third World Cup title in the soccer-mad nation’s glorious history, and its first since 1986. Messi now possesses the one trophy to elude him—the most important trophy in the world’s most popular game.

Argentina dominated the start of the final in Lusail, Qatar, and took a 2-0 lead into the half. The roars of Argentinian fans seemed to drown out all sound in the stadium. In the 23rd minute, Messi stood focused, ready to take a penalty shot in a scoreless game that Argentina was firmly dominating. Messi stepped to the ball, stopped to juke out France keeper Hugo Lloris, and placed it in the right side of his net, his fourth penalty goal in the World Cup in five attempts. The pressure of the penalty shot suffocates most players. All tournament long, the gravity of these moments seemed to make Messi better.

Ángel Fabián Di María, who plays for Juventus in Italy’s Serie A, also starred for the Albiceleste in the first half. It was Di María, after all, who drew the penalty that led to Messi’s goal. And in the 36th minute, Di María finished off a sequence that should be replayed by any soccer coach worth his or her salt, the world over, as a model for unselfish behavior on the pitch. Messi started the counterattack with a flick on the outside of his foot, sending the ball to Julián Álvarez, who passed ahead to a sprinting Alexis Mac Allister, who sent a perfect cross to Di Maria, who then punched it in for a 2-0 lead.

By the time the 80th minute rolled around, France had yet to seriously threaten the Albiceleste. Suddenly, however, Mbappé unleashed his fury.

He converted a penalty shot to cut Argentina’s lead in half, 2-1. Messi and his mates would not cruise to their championship.

Then, one minute and 33 seconds later, fans witnessed what would seem impossible, if Mbappé wasn’t involved. Marcus Thuram won control of the ball, lofting a pass to Mbappé on the left wing. Mbappé ripped a heart-stopping volley just past the left hand of Argentina keeper Emiliano Martínez. The game was tied, 2-2. Mbappé’s unmatched motor was fully turned on, and at this point, he looked ready to finish off a stunned Argentine side with a hat trick in regulation.

But regulation ended with the game still tied. In the second half of extra time, however, Messi delivered once again. In the 108th minute. A shot bounced off of French keeper Hugo Lloris and a sprinting Messi was right there, to rocket a rebound that clearly crossed the goal line before French defender Jules Koundé kicked it clear of the net. Goal, Argentina.

You would think. But Mbappé refused to concede. In the 118th minute, right before the final whistle, he fired a shot off of the right arm of Gonzalo Montiel of Argentina. Penalty. Mbappé calmly struck the penalty shot into the right side of the net to tie the game at 3-3, and became the first player since Geoff Hurst of England, in 1966, to net a hat trick in a World Cup final.

With momentum back in France’s control, Les Bleus almost won its second straight World Cup at the buzzer. In the 120th minute, Mbappé delivered a near-perfect cross to Randal Kolo Muani, who leapt as high as he could: the ball, however, was barely too high for his header, and he couldn’t finish off the play. Moments later, Kolo Muani had another chance to score. But Martínez stuck out his left leg to make the most crucial last-second kick save in World Cup history, bar none. Martínez gave Argentina a chance to win the match—finally—in a penalty shootout.

Mbappé and Messi—who else?—traded goals in the first penalty shot for each team. Martínez made a clean save on a Kingsley Koman shot. Paulo Dybala of Argentina punched one right up the middle, while France’s Lloris dove to his left, to give Argentina a 2-1 advantage in the shootout. After Aurélien Tchouaméni of France missed wide left, and Leandro Paredes scored for Argentina, the Albiceleste could taste victory.

On Argentina’s next penalty shot, Gonzalo Montiel fired the ball to the left side of the net. Lloris didn’t have a chance. Argentina won the World Cup. Buenos Aires went berserk.

The final more than delivered on its promise of a star-studded matchup between Messi and his potential successor as a generational player, Mbappé. Messi won the Golden Ball at this Qatar World Cup, as the tournament’s best player. Mbappé won the Golden Boot, as the World Cup’s top goal-scorer. He finished with eight goals, to Messi’s seven.

France and Mbappé, who plays with Messi for the Qatar-owned club Paris Saint-Germain, were trying to become the first repeat World Cup champions since Brazil, who earned championship trophies in 1958 and 1962. Mbappé, 23, and his mates will be a force for a generation. But today, Messi and Argentina just proved a little too much to handle.

The win ends years of World Cup frustration for Argentina fans. Argentina last won a World Cup in 1986, when the great Diego Maradona shined for the Albiceleste. Argentina made two finals—in 1990 and 2014—since then. But Germany triumphed in those two finals. (West Germany in 1990).

Argentina’s World Cup in Qatar began in disastrous fashion, with a shocking 2-1 loss to Saudi Arabia on November 22. Since then, however, Argentina went undefeated, outscoring its opposition 14-6 the rest of the tournament.

Of particular note, Argentina’s win serves as a fitting career capstone for Messi, the greatest player of his era, and one of the best of all-time. This has been a stellar tournament for Messi; he put his full array of skills on display. Yes, Messi scored plenty of goals in this World Cup, but his passing showed why he stands alone. In the quarterfinals against the Netherlands, Messi thread a ball through what seemed like the entire Dutch team: Nahuel Molina was the beneficiary of Messi’s brilliance, and scored to give Argentina a 1-0 lead in that game.

Messi’s assist against Croatia, in the semis, was a true work of genius. He went on a run down the right side of the field, spun twice while evading the defense before delivering a pinpoint pass to Álvarez, who scored to give Argentina a 3-0 lead and end all hope of Croatia returning to the World Cup final.

For years, Messi’s relationship with his home country was, well, complicated. He left Argentina at 13, to be trained at Barcelona, for whom he would make his competitive debut at 17 and scored an outrageous 672 goals. But he never seemed to shine as brightly for the national team, and many Argentine fans questioned his dedication to a place he left as a teen.

Messi always voiced his enthusiasm. “Argentina is my country, my family, my way of expressing myself,” he said in 2014. “I would change all my records to make the people in my country happy.” But after losing in the Copa América in 2016, Messi thought hard about retiring from the national team. He came back, but France knocked Argentina out of the 2018 World Cup, in the round of 16.

In 2021, however, Messi began to write a new narrative. Argentina defeated Brazil in the Copa América final, giving the Albiceleste its first major international trophy since 1993.

His outstanding play at this World Cup rallied millions of Argentinians across the globe. It also thrilled fans of all stripes who admire beautiful play. With this signature World Cup win, all questions about Messi’s love of country—and true iconic status in the history of the game—will never be uttered again.

Fans will just talk about the twists and thrills of this game. And how lucky we were all were to live it.