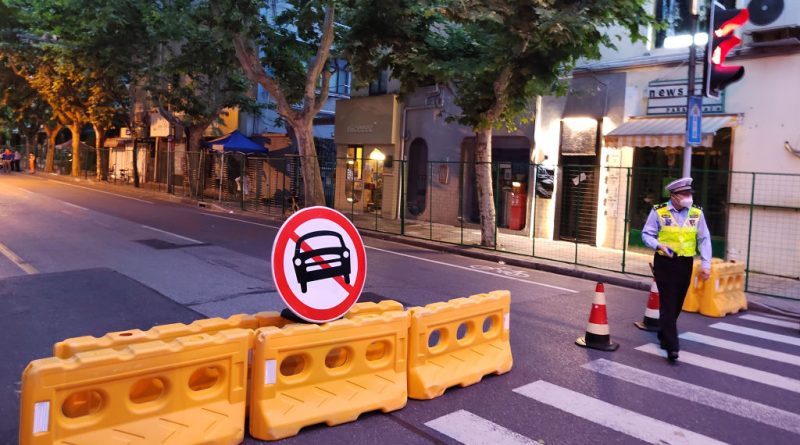 
Shanghai will briefly lock down almost everyone in the city this weekend for mass testing as Covid-19 cases continue to emerge, causing more disruption and triggering a renewed run on groceries days after exiting a grueling two-month shutdown.

The plan emerged from one area with a handful of cases and spread in hours to 14 of the financial hub’s 16 districts. It encompasses almost all of the city’s 25 million residents as health officials use testing to root out any silent transmission of the virus, a key tool in China’s Covid Zero arsenal.

The quick escalation reflects the worry that continues to shroud Shanghai, which implemented one of the world’s strictest lockdowns in late March after a sluggish initial response to its outbreak. The latest move follows a rebound in infections within the community to six on Thursday, up from zero the day before. Residents will be released after taking the tests, but they’ll be back under lockdown if new infections are found in their compounds.

There were 5 additional infections found among people in quarantine on Thursday, for a total of 11 cases in the financial hub, health officials said. Nationwide, China added 73 infections.

The return to lockdowns in Shanghai underscores the difficulties of China’s attempts to eliminate the virus while the rest of the world accepts it as endemic. The disruption wrought by pandemic curbs have impacted production at companies like Sony Group Corp. and Tesla Inc., with the electric-car maker only now normalizing operations at its factory in southern Shanghai.

The renewed restrictions aren’t yet having a significant impact on the financial markets.

A policeman guards a residential area under lockdown in Shanghai, China Tuesday, June 7, 2022.

“Investors are watching but there is not much reaction at the moment given its just flare ups,” said Kevin Li, fund manager at GF Asset Management (Hong Kong) Ltd. “If it expands into more areas that affect people turning to work, then it will lead to some volatility.”

One of the major clusters is centered on the Red Rose Salon in the Xuhui district, where services were in high demand after it reopened following the lockdown that began at the end of March. Three infections were tied to the beauty salon during the Thursday briefing, including two in employees who live in Minhang, the district that has posted the highest number of recent cases.

Read More: China’s Public Is Divided Over the Zero-COVID Approach

Of the six community cases, four were found in Minhang, a district of 2.65 million in the south west of Shanghai. Minhang — a mostly residential area — will be sealed on Saturday morning for mass testing, according to a statement. Many other districts are also testing on Saturday, though several didn’t specify the dates or times.

Only two districts with fewer than 2 million residents, Putuo and Chongming, aren’t on the testing list.

Health workers prepare to take a swab sample from a man in the Jing’an district of Shanghai early on June 7, 2022

China doubles down on Zero-COVID

The latest moves hit home quickly for residents. It led some to flee their apartment complexes and sparked a run on grocery stores after many struggled to get fresh fruits and vegetables in the early days of the original lockdown. While the latest curbs may lift in as little as a few hours if no new infections are found, two more weeks of isolation may be imposed for areas where new chains of transmission are uncovered.

Most economists say it will be tough for China to meet its annual growth target this year because of lockdowns. By having zero tolerance for new cases, the country risks being in a constant loop of imposing and easing restrictions.

Still, President Xi Jinping continues to emphasize the country’s adherence to a policy that has delivered one of the lowest Covid death rates in the world. Xi called for Covid Zero to be adhered to “unwaveringly” in a visit to Sichuan province Thursday, according to the official Xinhua news agency, while stating that it should be achieved in balance with the needs of the economy.

The remarks echoed sentiments from mid-March, when Xi first urged Chinese officials to reduce the financial impact of Covid-fighting measures. Shanghai authorities worked to allow manufacturers to establish so-called closed-loop systems in their plants that enabled them to continue operating. The setups create a bubble in which workers only go to and from the factory, sometimes living on site, and are tested regularly to detect Covid incursions.

The threat of disruptive measures also returned to Beijing on Thursday, with mass testing resumed in several neighborhoods of the capital’s key Chaoyang district, home to company headquarters and embassies. A flareup of Covid in a bar ended a five-day streak of zero community spread. Beijing reported eight new local Covid cases for Thursday.

There are signs China is trying to use ubiquitous and accessible testing as a way to avoid costly lockdowns. Special testing kiosks are being set up on street corners in major cities so that residents are never more than 15 minutes away from a PCR testing opportunity. The idea is that constant testing — a negative test is required to enter shopping malls and even parks in some places — will find early chains of transmission before they get out of control.

Infections are also spreading in China’s north, with outbreaks in Inner Mongolia and in Dandong, a city on the border with North Korea, which recently acknowledged what it claimed was its first Covid outbreak.