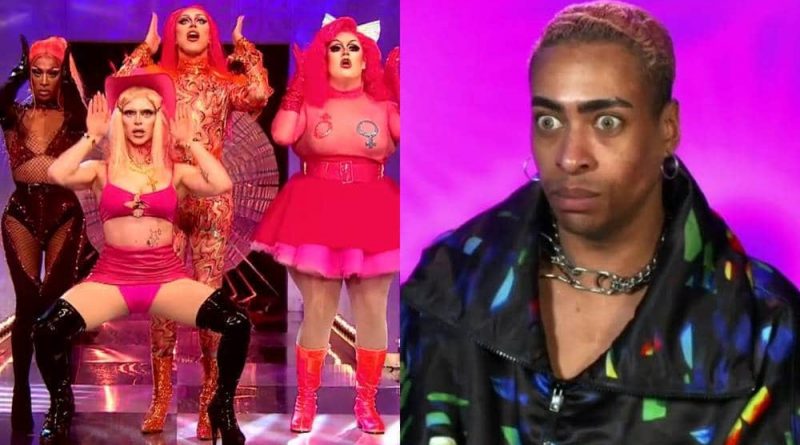 The United Kingdoll’s smash hit “UK Hun?” and Tayce’s iconic one-liners are just some of the most gag-worthy moments from Drag Race UK herstory. (BBC)

It’s no understatement that Drag Race UK has got us through some tough times, and gifted us with some utterly iconic moments.

After what feels like a millennium (but is actually only about six months), Drag Race UK returns as season three death drops onto screens tonight. This year, there are 12 contestants on the show, including the franchise’s first cis female drag queen, and they’re guaranteed to give fans more eye-watering, stunning performances than ever before.

But before we welcome in the new gaggle of gorgeous queens, it’s time to go over the most gag-worthy moments in Drag Race UK herstory that stole our hearts and broke the internet.

Honestly, it’d be insulting not to kick off with the absolute bop that was “UK Hun?”

The season two queens were split up into two groups for a “Ru-Ru-vision” contest, a play on the popular Eurovision Song Contest. The United Kingdolls – composed of Tayce, Bimini Bon-Boulash, Lawrence Chaney and A’Whora – absolutely stole the show.

The song’s iconic “bing bang bong” line also became permanently embedded in our collective psyche, and good luck getting it out of your head now.

“UK Hun?” even entered the Officials Singles Chart and topped the charts at number 27, according to officialcharts.com.

2. Lest we forget the iconic Frock Destroyers

Before “UK Hun?” could embed itself like a tick in social media’s skin, the Frock Destroyers dominated the scene. Season one’s Divina de Campo, Blu Hydrangea and Baga Chipz made a big impression when they went up against the other girl group Filth Harmony on the show.

The Frock Destroyer’s rendition of “Break Up (Bye Bye)” smashed the internet. Divina de Campo’s impressive “whistle tone”, which is an iconic part of the song, absolutely bowled over singer-songwriter MNEK.

Thousands of fans have called for either the Frock Destroyers or United Kingdolls to represent the UK at Eurovision 2022.

She’s the queen of Brighouse, our whistle tone diva, and she werks a red wig and silver dress real good 😉@DivinaDeCampo, here are your best bits. #DragRaceUK #TeamDivina pic.twitter.com/pZdOrnuVM7

Let’s be real, Tayce’s incredible talking head moments were the cherry on top of the glitter-covered cake in Drag Race UK season two. But none were more iconic than the moment she uttered the words “the cheek, the nerve, the gall, the audacity and the gumption”.

The Welsh queen gifted the internet with the perfect phrase to cover up all sins. It perfectly describes living through the hellscape that is modern life, Michaela Coel getting robbed at awards ceremonies, and being invited to a last-minute all-team meeting.

It was so iconic, in fact, that Tayce repeated her catchphrase during an appearance on Little Mix’s music video for “Confetti”.

When your bank account accurately reports how much you spend. #DragRaceUK pic.twitter.com/tdrHixcwGC

4. Drag Race UK season one had arguably one of the best Snatch Games EVER

When Baga Chipz announced she would impersonate Margaret Thatcher in the first-ever Snatch Game, the UK collectively cringed.

But Baga excelled with her terrifyingly on-point impression of the late prime minister, especially when she played off The Vivienne’s uncanny Donald Trump.

Baga, as the Iron Lady, gave the best response when asked what Graham Norton’s Drag Race UK blend of wine tasted like. She quickly responded “redundancy”.

Speaking of Snatch Games, Bimini Bon Boulash stole the show in season two’s edition impersonating Katie Price. The non-binary queen of our hearts donned a huge breastplate and bowled over the judges.

Bimini-as-Katie served up hilarious one-liner after one-liner while wearing a sparkling tiara and pink tracksuit. They declared that the “eyes are the nipples of the face”, and that they had even “walked in the stables and caught my horse cheating on me”.

The internet adored Bimini’s Katie Price, and they trended on Twitter as fans heaped praises on them. The performance was so good that even Katie Price herself applauded the Drag Race UK queen.

6. All of us crying at Bimini and Ginny’s touching chat about being non-binary

Fans were left tearing up after Bimini and Ginny Lemon opened up about their gender identities on the werkroom floor.

Amid the buzz of sewing machines and queens plotting to get ahead, Ginny and Bimini had an emotional chat after Ginny opened up about why she wears yellow. She shared that the colour is for “healing a positivity” and is also the “non-binary colour”, adding she “always struggled with my identity”.

Bimini chimed in that “it’s always a difficult conversation to have, especially when some people don’t understand”.

Drag Race UK fans were floored by the exchange and thrilled to see the non-binary experience being given such a powerful platform.

Thank you @GinnyLemon69 and @biminibabes for opening up and bringing this extremely important conversation about gender identity to the forefront. You’re inspiring so many and we have so much love for you both 💛💛💛#DragRaceUK https://t.co/f9SbTLBdlt pic.twitter.com/QdivVbFcdX

7. Divina opening up about the effect growing up under Section 28 had on her

For all the sky-high wigs and tongue pops, Drag Race UK has used its worldwide reach as a platform to talk about important issues.

The show took a powerful turn as the queens reflected on growing up gay, and Divina spoke about living under Section 28, a reviled law that was brought in to “prohibit the promotion of homosexuality by local authorities”.

Divina recalled getting a “lock of flack from pretty much everybody” in school. She spoke about being “pushed and shoved” by classmates who would call her homophobic slurs and “throw their drinks at you”.

“Because of Section 28, a lot of teachers felt they couldn’t step in,” Divina said. “It did a lot of damage to people like me.”

Who could forget the moment that RuPaul ripped apart Joe Black for wearing an off-the-rack H&M dress to perform in the Eurovision-style group challenge?

After a seven-month break because of COVID-19, Joe seemingly rubbed Ru the wrong why when she was criticised for her windswept look for the Day at the Seaside runway. She then admitted the dress was from the high-street staple, and Ru was left fuming.

The rage-fuelled tongue lashing from Mama Ru caught the internet by storm, and it spawned hundreds of memes on the internet.