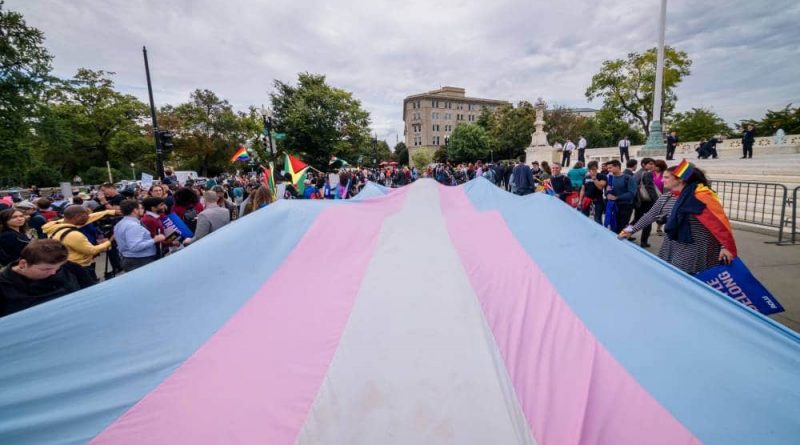 A giant trans flag unfurled outside the US Supreme Court. (Erik McGregor/LightRocket via Getty Images)

Two trans children and their parents have sued the state of Tennessee over its reviled bathroom bill.

The legislation, signed in May by Republican governor Bill Lee, allows students and parents to sue if a trans person is allowed to share bathrooms and changing rooms with them, according to ABC.

If a trans person is “unwilling or unable” to use facilities inconsistent with their gender identity, the school must provide a separate, single-occupancy space for them instead.

Filed in the District Court for the Middle District of Tennessee, the complaint argues that the law violates Title IX, the federal law that prohibits sex-based discrimination which the Biden administration has confirmed offers protections on the basis of sexual orientation and gender identity.

The bathroom bill is “morally reprehensible”, the advocacy group’s president Alphonso David said in a statement.

For the two plaintiffs, Alex, 14, and Ariel, six, the bill poses a volley of problems – and they simply don’t understand why they’ve been targeted in this way.

The lawsuit describes how Alex was barred from using the correct bathroom by his principal, instead being forced to use either the nurse’s office bathroom, the guidance office bathroom or a locked faculty bathroom.

Alex, the lawsuit states, fears that the new law will make him repeat what he faced in the seventh grade.

“When I started the seventh grade, I just wanted to blend in,” he told the HRC. “Having to use a ‘special’ bathroom made me stand out… so I just stopped having anything to drink during the day.”

His mother Amy told NBC News that “nobody should have to do that just so they don’t have to go to the bathroom”.

Alex had to transfer schools in eighth grade during the throes of the coronavirus pandemic just to be able to use a boy’s bathroom.

“It stresses me out that I’ll have to deal with this all over again at my new school,” he said in the statement.

Ariel, who is set to start first grade in the autumn, used the girl’s bathroom throughout her time in private kindergarten.

However, now that she’s going to a public school, she has been told that she can only use the girl’s bathroom for the first month. After that, with the law in effect, she likely will no longer be able to.

“These are children,” her parents Julie and Ross said in a joint statement, “they deserve to be happy, go to school and live their lives.

“They are not here to make a statement – they are here to be children.”

The law, Julie told NBC News, “makes me afraid of her being here”.

“They’re making it a dangerous place to essentially say that my child is different from everyone and therefore essentially should be segregated,” she said.

The bathroom ban is one of a wave of bills Tennessee legislators have pushed forward, including one banning gender-affirming care for trans youth, a second bathroom bill that forces businesses to post signs disclosing that trans people use their bathrooms, and a bill allowing adoption providers to discriminate against LGBT+ people.

HRC bosses branded the ban on trans students from accessing bathrooms as “devoid of any sound legal justification”.

“The common thread that ties our legal challenges together is our commitment to protect our community’s most vulnerable — children,” Alphonso David said.

“The Tennessee law, which denies transgender young people the ability to use facilities consistent with their gender identity, is not only morally reprehensible but devoid of any sound legal justification and cannot withstand legal scrutiny.

“Courts have time-and-again ruled against these dangerous and discriminatory laws and we are going to fight in court to strike down this one and protect the civil rights of transgender and non-binary young people.

“With our representation of two transgender kids today, we are sending a strong message of support for all transgender and non-binary children across the country — you matter, and your legal rights should be respected.”