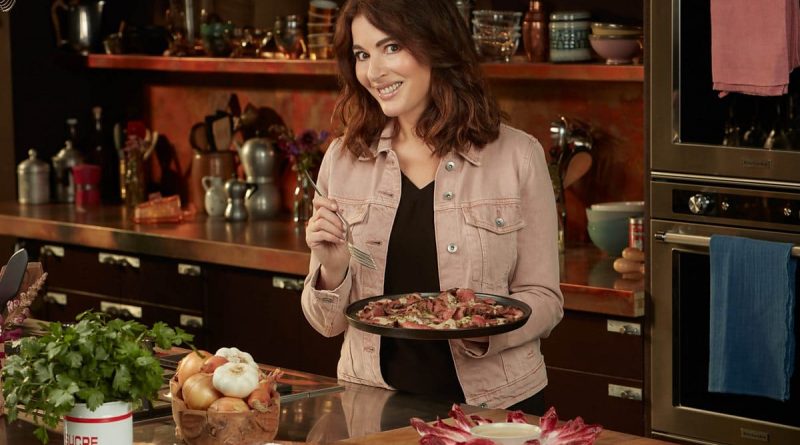 Nigella Lawson once said that she is “a gay man in a woman’s body” – and honestly, it’s hard to disagree.

The famed television cook and food writer is loved by pretty much everyone, but she has a particularly ardent fanbase in the LGBT+ community.

The reasons are obvious to anyone who is part of the LGBT+ community themselves: Nigella Lawson is camp personified. Time and time again, she has taken camp to a whole new level through her cookery programmes and through her sumptuously-written books.

Not only is she highly committed to the art of camp – Nigella is also a fiercely committed LGBT+ ally, which means stanning is more or less compulsory.

We reflect on six times Nigella Lawson took camp to a whole new level through her legendary cookery shows and endlessly entertaining series of books.

The word “microwave” is unnecessarily boring, which seems unfair for an appliance that has the ability to reheat leftover pizza or make popcorn depending on your mood.

That’s clearly the reason Nigella decided she was reinventing the pronunciation of “microwave” to something closer to “mee-cro-wah-vé” in her latest series Cook, Eat, Repeat.

The incredible moment quickly sent shockwaves through the internet, with gays collectively flocking to Twitter where they could collectively faint in their admiration of Nigella’s commitment to camp.

Hilariously, many people didn’t quite get what was going on – some people thought Nigella actually didn’t know how to pronounce microwave – but queer Nigella fans always knew the real reason. It’s simple really – why say “microwave” when you there’s a more glamorous option?

2. Her giant bondage-style liquorice box is something to behold

Viewers were agog when Nigella whipped out a giant black box from the cupboard in her 2018 series Simply Nigella. What could possibly be inside such a stylish box?

You would be forgiven for thinking it was a box for storing all things kink related, but no – it was Nigella’s liquorice box. The box has made subsequent appearances and has become something of a touchstone for avid Nigella watchers.

Now, each time a Nigella series hits television screens, queer people gather around in their living rooms and wait with baited breath for Nigella to fetch the truly glorious, beautifully camp liquorice box.

3. Her midnight snacks are the stuff of legend

It’s become something of a tradition over the years for a Nigella episode to end with the cook, looking as poised and glamorous as ever, to saunter into her kitchen wearing a silky black dressing robe for a midnight snack.

It’s probably the closest Nigella has come to doing full blown drag – the ritual is both an ode to pleasure and an ode to glamour rolled into one.

Needless to say, queer people love it. We’re still trying to perfect our midnight snack looks to this day.

4. All the times she turned Christmas into literally the gayest thing on earth

As Kylie Minogue would say, Christmas isn’t Christmas until Nigella gets here.

The cook’s sumptuous television offerings are the staple of the festive season if you’re partial to watching re-runs on Food Network (aren’t we all?). Her Christmas cookbook is also the stuff of dreams.

Naturally, Nigella has made the yuletide gay on more than one occasion. From her potentially unhealthy obsession with fairy lights to her habit of dunking a turkey in an enormous bucket to steep overnight, Nigella has always been committed to bringing camp excess to Christmas.

Next time you see one of her Christmas specials – or her majestic Christmas series – on television, sit down and bask in its camp glory.

5. Nigella Lawson owns a leopard print knife, because of course she does

We’ve all been there – you’re chopping vegetables at the end of a long, hard day at work and you find yourself looking down at your knife thinking: “I wish I had something a little more flamboyant to do this job with.”

Well, you’re in luck, because Nigella owns a leopard-print knife. This knife had its own viral moment in 2020 when Nigella’s series Cook, Eat, Repeat landed on television screens.

Twitter was immediately full of people heaping praise on Nigella for managing to bring even more camp to the table after many years gracing our television screens.

Hilariously, the episode prompted countless people to explore the darkest crevices of the internet in the desperate hope that they could fine their own leopard print knife – and they succeeded, too.

6. She knows just how camp everything she does is – and that’s yet another reason why we love her

Nigella has had so many camp moments in her cookbooks and television shows over the years that it’s impossible to list them all – and that’s what makes her a camp legend.

In November 2020, somebody compiled a Twitter thread explaining why Nigella is the UK’s Dolly Parton – an assertion we can all get behind.

Nigella shared the thread, simply writing: “Camp? Moi?” proving that she lives and breathes camp in all walks of life.