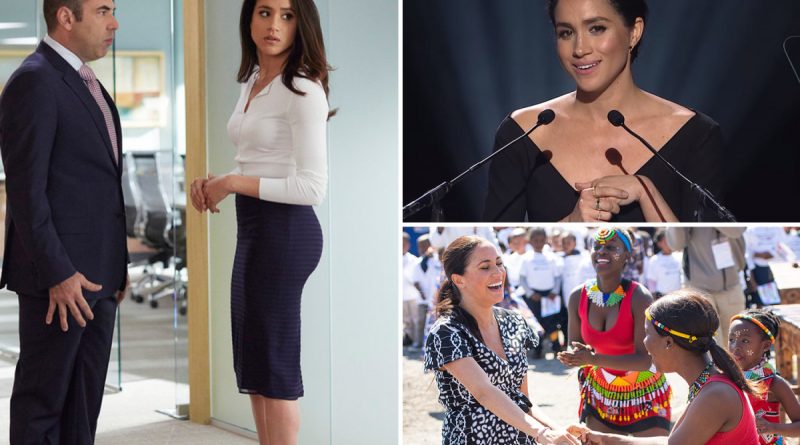 The Duchess of Sussex is today celebrating her 40th birthday and reportedly has her sights set on bigger and better things for the next 10 years.

She has already starred in a hit TV series, married into the Royal Family – and left again – and become a mum of two.

Meghan has also launched a non-profit organisation, given her support to tackling climate change, delivered a UN Women speech and become a bestselling author.

But as she embarks on life in her 40s, Meghan shows no signs of stopping.

So as she celebrates her milestone birthday, here are six things she could achieve in the next decade – and one she definitely won’t.

Meghan Markle could run for president in the United States within the next 10 years, according to biographer Tom Bower, who is “convinced her destiny will soar towards greater fame and fortune”.

Looking ahead to life in her 40s, Bower wrote: “Once Harry has finished promoting his books, will Meghan launch her own global campaign to engage in the swirling muck of American politics?

“Just as she seduced the Royal Family, will she tempt California’s power brokers to promote her own political ambitions to the Senate and possibly beyond, via her friendship with America’s vice-president Kamala Harris and the Obamas?

“Although her political rhetoric is skeletal and her skin is thin to ­criticism, surely that is the next step on her Crusade for ­Goodness.”

He said Meghan could use her high-profile connections to fuel her political dreams, following in the footsteps of Hillary Clinton.

And he said if she was not able to get a Senate seat, she could run for the state’s governorship.

Bower added: “Meghan certainly has the guts and self-belief to fight to the top of the greasy pole. The question is whether she has the stamina.”

MEMOIR ON THE HORIZON?

Prince Harry last month announced he was writing a tell-all memoir – timed for release in the Queen’s Platinum Jubilee year.

In language bound to cause panic in Buckingham Palace, Harry promised to examine the “highs and lows” of his extraordinary life as a royal, which culminated in his bitter “Megxit” split from The Firm.

But The Sun’s royal photographer Arthur Edwards reckons Meghan will write most of it.

The snapper said: “It will be interesting to see if his wife Meghan writes most of this book — as she seems to write everything else he puts out almost on a daily basis.”

Harry’s announcement led other royal experts to speculate that Meghan herself could release an autobiography – particularly after she has already penned a picture book.

Phil Dampier told The Sun Online: “It just makes you wonder what’s coming next. Who knows, Meghan will probably write her memoir as well.

“She’s already tried to cash in with her children’s book so there is definitely still that option for her to do a book.”

Meghan may look to follow in Princess Diana’s footsteps and set up her own charitable foundation.

The Diana, Princess of Wales Memorial Fund was an independent grand-giving organisation which was launched to continue her humanitarian work after her death in 1997.

The duchess already has her non-profit Archewell Foundation to “uplift and unite communities”.

But she could create a Meghan Markle foundation to further her “compassion and altruism”.

BACK ON THE BOARDS

The Duke and Duchess of Sussex signed a mega £112m deal with Netflix last year after quitting the Royal Family.

Their first series will be an Invictus Games documentary, but the couple is teed up to make programmes for kids as well a fly-on-the-wall reality series so Meghan can show the world the “real her”.

And as Meghan started her career as an actress – and she is known for wanting to tell “her truth” – the former Suits star could appear in the streaming service’s The Crown.

The hit show, which chronicles the life of The Queen from the 1940s, is filming its sixth series which will bring it into the early 2000s.

Although producers have said they wouldn’t tackle the Meghan saga in the programme, mammoth viewing figures could sway them.

Series four had more global viewers in its first week than Prince Charles and Diana’s real wedding had in the UK.

So as the show’s popularity increases, demand for Meghan’s story to be told could see her in front of the camera.

Meghan has boasted of a close friendship with TV mega star Oprah Winfrey – despite rumours the pair had met only once before her wedding to Harry.

The high-profile women first made contact after Meghan’s friend, CBS anchor Gayle King, made the introduction.

The new pals allegedly spoke on the phone before meeting face-to-face at Kensington Palace in March 2018.

Oprah was invited to the May 2018 wedding shortly after, alongside stars such as David and Victoria Beckham and George and Amal Clooney.

The pals now live down the road from one another, after Meghan and Harry splashed out on a £11million mansion in Montecito, California.

Both like to promote ‘woke’ issues and Meghan “is looking to take Oprah’s crown”, according to a PR expert.

Andy Barr told Closer magazine: “Meghan is 100 per cent the driving force behind this power couple – she has a lot of ambition and a lot she wants to achieve.

“I believe she’s looking to take Oprah’s crown – which is ironic, considering she’s given them a foothold in America.”

Meghan and Harry joined activist Malala Yousafzai – the youngest person ever to win a Nobel Peace Prize – to discuss women’s education in 2020.

The feminist trio marked International Day of the Girl to talk about the issue close to their hearts.

The honour is awarded to those who have “done the most of best work for fraternity between nations, for the abolition or reduction of standing armies and for the holding and promotion of peace congresses”.

So with charitable initiatives galore and a dedication to “real action”, could the duchess be on track to score the prize herself?

But there is one thing the duchess certainly won’t do.

Buckingham Palace confirmed that Harry and his wife would not be returning to royal duties – a decision that made their departure formal and final.

A statement from the couple also verified that “they will not be returning as working members of the Royal Family”.