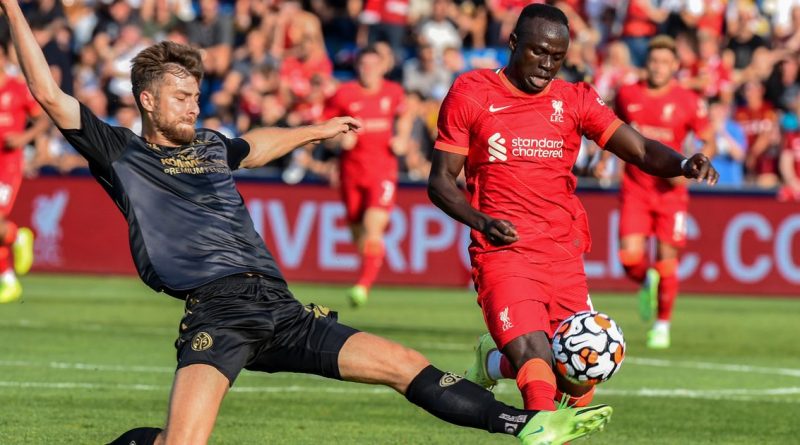 A late own goal gave Liverpool victory over Bundesliga side Mainz in their first 90 minute pre-season friendly of the summer.

Fielding two different XIs, a stronger Liverpool side enjoyed the majority of possession in the first half, with Alex Oxlade-Chamberlain going close when he saw his effort tipped around the post by goalkeeper Robin Zentner.

Sadio Mane also went close in the first period, but a much younger Liverpool side struggled to create many opportunities in the second half, although teenage forward Kaide Gordon did go close.

Goalkeeper Adrian had to be alert to tip over a late effort as Mainz improved the longer the game went on, before young Liverpool full-back Owen Beck’s cross was turned into his own net by Luca Killian for the only goal.

Here are the main Liverpool talking points from the game.

1. Joel Matip and Ibrahima Konate may need to get used to each other

The start of Liverpool’s pre-season was always going to be interesting to see which of the club’s centre-backs were going to return from last season’s ailments.

With Virgil van Dijk and Joe Gomez both not yet risked in either of Tuesday’s half hour matches or here, it has been Joel Matip who has been the first to return from the infirmary, and he was partnering new boy Ibrahima Konate here.

That’s right, another new partnership at the back for the Reds, but this one looked to possess a bit more quality than last season’s that were often cobbled together.

Konate is a clearly a very promising front-foot defender, and combined with the more laid back approach of Matip, Liverpool were able to serenely get through the first half.

As question marks remain over Van Dijk and Gomez, it could well be that Matip and Konate start the Premier League season at Norwich.

Having agonisingly missed the European Championships through a thigh injury picked up in a warm-up match, Trent Alexander-Arnold is back fit – and soon firing.

Although his most notable attacking contribution was flying a close-range free-kick over the bar, the right-back looked sharp ahead of his fifth season as a senior player at Anfield.

Linking well with Mohamed Salah and the dynamic front three, Jurgen Kopp will be pleased to see that he won’t have to wait on the 22-year-old’s return to full fitness, unlike Van Dijk and Gomez.

Having impressed in a wide forward role with Championship side Blackburn Rovers last season, Harvey Elliott once again started as part of the midfield three after starring in the shortened friendly against Stuttgart on Tuesday.

Although in a different mould to Gini Wijnaldum, the 18-year-old could give Klopp some thinking to do ahead of Liverpool’s Premier League opener against Norwich.

His technical ability is unquestionable but his tenacity and drive to get on the ball says more about his attitude on the pitch.

Rotating with Naby Keita as the most advanced midfielder, Elliott’s impact in his 45 minutes gave more reasons for Reds fans to get excited.

When he was substituted before half-time in the Champions League defeat to Real Madrid there were many of us who wondered if we’d see Keita in a Liverpool shirt ever again, but Klopp is a manager who sticks by his boys.

The Guinean will continue to be give chances by the Reds boss, and in his latest one here he turned in a sparkling display in the first period as he appeared to show some of the confidence that is often lacking from his game.

There was one point when he seemed to nutmeg half the Mainz side, and if – and yes, it is a big if – he can take that sort of form into the meaningful matches then he’ll still have a future at Anfield.

5. Divock Origi and Takumi Minamino on the fringes

As Klopp opted to change his full XI at half-time, off came the big boys and on came a flock of youngsters – along with captain on the night Divock Origi, and Takumi Minamino.

The two were toothless up front in the win, but more concerning for them personally is the fact they were part of the Reds’ clearly weaker side.

The second half saw both a dip in quality and tempo as Mainz probed and grew in confidence.

Curtis Jones looked far more lively than his forward colleagues, as did assist-making left-back Owen Beck, although Origi almost netted the opener around the hour mark after latching onto a through ball before he was denied by goalkeeper Robin Zentner – and the offside flag.

Due to his more recent arrival, playing profile and somewhat promising loan spell at Southampton in the latter half of last term, Minamino can at least take comfort knowing he may well have more chances left under Klopp than his Belgian team-mate.