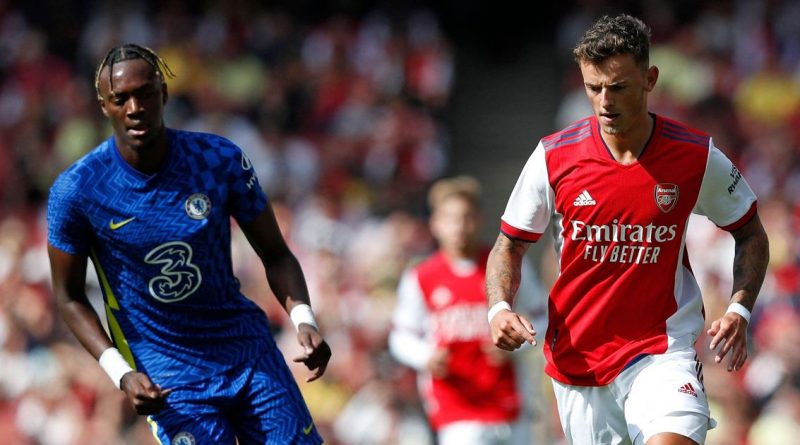 
Thomas Tuchel’s chopped and changed Chelsea side came out on top at the Emirates on Sunday, but Mikel Arteta’s Arsenal were on top for large spells in he Mind Series friendly

Kai Havertz and Tammy Abraham secured Chelsea’s first victory over Arsenal since 2019 with two thunderous efforts in Sunday’s pre-season friendly at the Emirates.

German Havertz teamed up with compatriot Timo Werner to open the scoring, firing past a helpless Bernd Leno after a speedy Chelsea break caught Arsenal napping in the first half in north London.

Granit Xhaka came off the bench to equalise for Arsenal with a header from a corner before Abraham capitalised on a Hector Bellerin mistake to fire Chelsea back in front.

Both managers chopped and changed their teams throughout the match as new £50million Arsenal signing made his debut.

Here are five talking points from The Mind Series clash, which is in support of better mental health.

It was a big day for Arsenal’s Ben White and Chelsea’s Tammy Abraham this Sunday with the former making his first appearance in an Arsenal shirt since his £50million switch from Brighton, and the latter taking his final chance to impress Thomas Tuchel.

White will need a few games for Arsenal to give him time to adjust, although largely he didn’t have a great deal to do after coming on in the second half at the Emirates.

He showed a calmness in possession though, especially when under pressure, which is something Arsenal have severely lacked in recent seasons and will be hugely beneficial to Mikel Arteta’s side going forward.

He also cooly cleared the ball from the line on one occasion, keeping Arsenal in the game.

Abraham, meanwhile, took his opportunity to shine with both hands – firing Chelsea back into the lead moments after Granit Xhaka equalised for Arsenal.

Whether he’s done enough to impress Tuchel remains to be seen – Abraham is still linked with a move away from Chelsea this season, interestingly, to Arsenal – but his goal has helped put him in the shop window if nothing else.

All eyes were on Chelsea’s German duo Kai Havertz and Timo Werner when they joined the club this time last year for £70million and £50million respectively.

Both took some time to settle in in South West London, first under Frank Lampard and then with compatriot Thomas Tuchel, and there were fears that they may fail to adapt to the Premier League.

But Tuchel found a way to unlock their brilliance and while there are still question marks over Werner’s ability to hit the back of the net, Havertz is currently one of the best players in the English top-flight.

He proved this point when he scored the only goal in Chelsea’s Champions League victory over Manchester City last season.

And the 22-year-old drummed the point home again on Sunday when he slammed one past Bernd Leno with ease to put the Blues ahead against Arsenal at the Emirates.

Granit Xhaka has been linked with a move away from Arsenal all summer and very nearly joined Roma just last week before the Gunners pulled the plug on the move.

It was reported that Arsenal were unhappy with the transfer fee.

Xhaka hasn’t always been the most-loved player at the Emirates. One episode against Crystal Palace in which he mouth “f*** off” to fans before removing and throwing his shirt to the ground lives long in the memory.

Granit Xhaka equalised for the Gunners
(

Xhaka’s actions lost him the captaincy, but since the outburst, the Switzerland international has become an increasingly important player for Arsenal and his equaliser against Chelsea on Sunday typified that.

If Xhaka does leave Arsenal then he will need to be replaced. And finding a like for like player may not be as easy as it seems.

Ducks in a Rowe

Mikel Arteta and Edu both announced last year that Arsenal are lacking in the number 10 position.

Mesut Ozil wasn’t cutting the mustard and had his contract terminated by mutual consent, and the Gunners hastily brought in Martin Odegaard on loan from Real Madrid to plug the gap.

The Norway international captain showed glimpses of class but perhaps wasn’t consistent enough to set Arsenal alight – certainly not enough to drag them kicking and screaming back into the Champions League spots.

This summer the Gunners have been linked with a host of creative players, including Leicester City’s City’s James Maddison, but are yet to make a move for anyone in that mould.

Instead, Emile Smith Rowe has been handed the number 10 shirt, which promotes the assumption that he will be an important component of Mikel Arteta’s team this season.

On Sunday, the Englishman started in his favoured position against Chelsea, and certainly, in the first half, he was the Gunners’ best player by a country mile.

He came closest to scoring, hitting the post on the half-hour mark shortly after Chelsea opened the scoring.

He intelligently drew a foul and a subsequent yellow card from Mateo Kovacic with some clever footwork, and finally, just before the break, the midfielder pulled off a Cruyff turn to the delight of the fans inside the Emirates.

Smith Rowe is full of confidence and if things go to plan for him, he’s set for a big season.

Hector Bellerin was once one of Arsenal’s best players, but in recent seasons things have fallen by the wayside.

As other clubs, including Barcelona, Inter Milan and Paris Saint-Germain, have shown interest in him, his form has dropped and he doesn’t appear to be in Mikel Arteta’s plans going forward.

A transfer would probably be the best outcome for all parties.

On Sunday, Arteta started Calum Chambers ahead of Bellerin at right-back.

Chambers has had a stop-start career to this point; showing spells of brilliance on loan at the likes of Middlesbrough and Fulham, but perhaps not enough to earn a place in the Arsenal first 11.

Against Chelsea, the defender was bright and showed a willingness to get forward.

He also moved inside to win some key midfield battles.

Bellerin, on the other hand, came off the bench to set up Tammy Abraham to score for Chelsea.

This season is a big one for Chambers, as Arteta may entrust him to patrol Arsenal’s right flank.

Get it right and he’s finally broken into the first team after seven years. Get it wrong and he may just be out of chances.