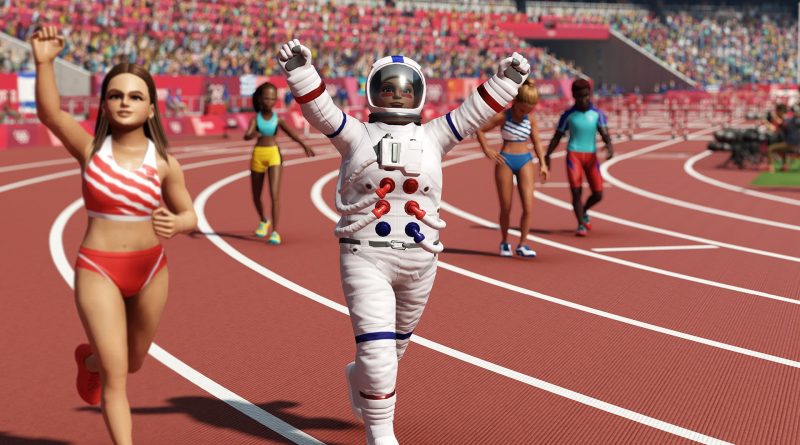 To celebrate the Tokyo Olympics 2020, we’re taking a look at LGBT+ representation in sports video games.

It’s a topic that’s difficult, largely because there is so little queer representation in the genre.

Sports are too often the domain of straight white men and sadly sports video games follow suit. Heck, only recently did EA add female teams to their FIFA games and even then it’s only as country teams and not club teams. That does mean you can still play as the iconic Megan Rapinoe for the US at least.

There is some positive LGBT+ representation though, at least in modern games. Let’s take a look at a few.

This year’s Games gets a gaming tie-in thanks to Sega, even if it lacks Mario and Sonic. Still, it has a fun cartoony aesthetic as you compete in various sports across track, field, aquatics and beyond.

You can choose to compete as licensed players from 80 different national teams, or you can create your own. Here’s where things get more interesting. Initially the character creator is tied to gender binary, but most options are open including physique, hair styles, makeup and facial hair.

It means you can truly compete as whoever you want to be. There are plenty of outfits to unlock ranging from the colourful to the downright wacky, though they are sadly tied to gender binary. Still, if you’re looking to race down the track looking as gay and outlandish as humanly possible, you can do that here.

Football has long been a tricky sport for LGBT+ people, with support rife with homophobia and gay players afraid to publically come out. That’s slowly changing though, as shown by the support and inclusivity of England’s current team.

Football Manager is also doing its bit. Since 2018 the series has included gay new-gen players – computer generated to take the place of ageing real-life players. A player coming out gives a boost in revenue to show support.

What’s more, developer Sports Interactive teamed up with Pride Sports to include the Football vs Homophobia campaign in the game. Throughout LGBT+ History Month this year, digital banners for the campaign could be found across multiple stadiums in the game, slowly raising awareness among the game’s millions of players. We love to see it.

2020 saw the release of Tony Hawk’s Pro Skater 1 + 2 remake for current consoles, bringing the old PS1 games up to date.

But there was one addition that went under the radar for some: Leo Baker. The game of course includes an up to date list of various playable real-life skaters and Baker is no exception, as an out non-binary pro. Baker’s inclusion in the Tony Hawk’s remake makes them the first non-binary character in a mainstream sports game.

Unless you’re familiar with the scene, though, you’d be forgiven for skimming over this detail. Pronouns aren’t used in the game for any of the skaters and Baker is simply referred to by their name, as with the others. And there’s no mention of their gender. Instead, it’s a subtle yet normalised inclusion, Baker added to the game – as one of the best skaters in the world – on merit and skill.

If you like your football with a little more sass and wit, then check out Behold the Kickmen. Renowned British developer Dan Marshall originally created a demo as a joke, but videos soon went viral on social media. Marshall then expanded it into a full game.

He’s not really a fan of football and that shows in the game’s design that satirises the beautiful game. The pitch is round instead of square and surrounded by walls; players can dash around opponents in an instant; and referees are here known as umpires. Marshall purposefully got things wrong, but still vowed to create a snappy sports game with a story mode full of comedy. It’s a football game for anyone who dislikes the sport’s toxic masculinity.

Best of all? Every time you score the “umpire” comes over to give your player a kiss. Aww.

If real-life sports games aren’t as queer as they should be, at least there’s a made-up sport instead. Blaseball is a phenomenon: a “splort” that’s an absurdist, text-based take on fantasy league baseball.

Essentially, gameplay involves choosing a favourite team, placing bets on simulated matches and collecting coins to spend on benefiting your team. What makes the game so unique, though, is its community spirit.

The presentation is bare, but fans have filled in the gaps with art, lore stories and more. That’s turned Blaseball into something inherently queer. Characters don’t have assigned genders, leaving their personalities open to interpretation by players who have really gone to town on diverse and inclusive representation and lengthy queer backstories – something that’s actively encouraged by the developers.

Blaseball is an example of the community spirit of sport. And isn’t that what sports are all about?