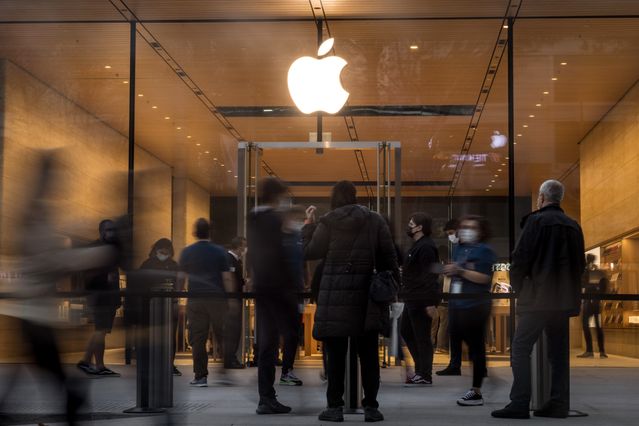 
Over the last two years,

stock has rallied an extraordinary 141%, driving the company’s market capitalization to nearly $3 trillion, as the company saw remarkable growth across every business segment – iPhones, Macs, iPads, wearables and services.

There are reasons to expect higher highs—and many new gadgets—ahead.

Citi analyst Jim Suva in a new research note repeated his Buy rating on Apple shares (ticker: AAPL). He lifted his price target to $200, from $170, which implies about 15% appreciation from the stock’s current level. Apple shares on Wednesday are up 0.8%, to $174.34.

Suva offers a list of five reasons Apple can climb even higher in 2022.

For starters, he sees continued revenue growth, driven in particular by strong iPhone demand and growth in related services. While investor sentiment on consumer hardware has turned “very dour” on concerns that demand for PCs and other gear will revert to prepandemic levels, Suva isn’t buying that view. He estimates that the installed base of iPhones has reached more than 1 billion, with replacement cycle times remaining the same or shortening.

“This implies that users value their devices and technology and will likely continue to invest in upgrades on a regular basis,” Suva writes. “Assuming that replacement rates hover around three years for smartphones and modeling for some of these upgrades to be refurbished devices, we believe that this suggests that the installed base upgrades still have room to translate into unit growth ahead, especially as 5G continues to roll out across major economies.”

Suva thinks iPhone 14, coming next fall, will include a faster processor, longer battery life, and higher-resolution cameras. He sees Apple launching a foldable phone in 2023.

He’s also bullish on the coming debut of a virtual/augmented reality headset, widely expected in the 2022 second half. Citi believes the AR/VR market “is poised for growth,” he writes. “The technology is the core of Apple’s next big hardware push beyond the iPhone, iPad, and Apple Watch.” He expects details on the product to emerge at the company’s annual developers conference in June. He expects a device priced in the $750 to $1,000 range.

Another reason for his bullishness is that service revenue growth isn’t likely to be affected by regulatory changes, Suva writes. While litigation has targeted Apple’s limitations on the use of third-party payment systems in apps, Suva thinks the outcome won’t be material to revenue.

“Many users prefer convenience and security over a small amount of financial savings,” he writes. “For developers, chasing higher margins via off-store billing is likely to come at the expense of lower conversion rates and, by extension, lower revenues.”

Apple shares, Suva adds, will also continue to benefit from the company’s aggressive posture on returning cash to holders via dividends and especially stock repurchases. With Apple generating more than $100 billion a year in free cash flow, he says, the company is likely to return at least $100 billion a year to holders. He notes that the company has announced new buyback plans in May in each of the last four years, and he sees another $90 billion authorization ahead—and he sees a 10% dividend hike coming.

Not least, Suva is upbeat on the prospect of an Apple Car. He expects a launch in 2025 or sooner.

“Apple entering the auto market is a matter not of ‘if’ but ‘when and to what extent,’” he writes. The analyst lays out two scenarios for Apple and cars. The first is that the company goes all in, and builds an Apple Car via outsourced production. The result could be a 10% to 15% boost to overall sales, with a 5% to 11% lift to Ebitda, or earnings before interest, taxes, depreciation and amortization. A more modest scenario has Apple focusing on the IT ecosystem for cars, like CarPlay, with a 2% lift to sales, and a 1% to 2% boost to Ebitda, he writes.