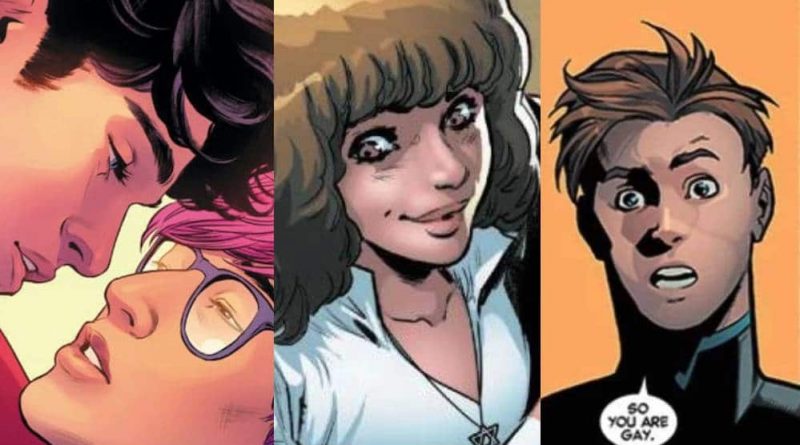 The pantheon of LGBT+ heroes is growing every day as more characters are sharing their coming out moments in comics.

The young Superman becomes “mentally and physically burnt out” by his duties, but he soon develops a loving relationship with reporter Jay Nakamura.

It isn’t the first (or hopefully the last time) a major hero has come out as part of the LGBT+ community. Coming out can be a huge moment in a person’s life and can be a difficult journey for some – especially if you’re also fighting super villains.

LGBT+ heroes have been making the realm of comics more colourful for decades, and their coming out moments have left their mark on queer fans who enjoy the genre.

As the number of queer comic book characters has increased with Earth’s mightiest hero Superman, here’s a look at four other courageous coming out moments when heroes decided to live their truth out and proud.

Bobby Drake – aka Iceman – is one of X-Men’s powerhouses, and he quickly became a major fan-favourite in the series. He became even more iconic after it was revealed in the pages of 2015’s All-New X-Men #40 that he is gay.

In the issue, a teenage Bobby from the past is displaced in time and was revealed as gay by his teammate, Jean Grey, through her telepathic ability.

In Uncanny X-Men #600, which was published months later, the young Iceman confronts his older self about his sexual orientation, and it’s then that the older hero confirms that he is gay. The older Iceman revealed he repressed his true self because he didn’t want to be both gay and a mutant.

In the new interaction, Tim has a crush on his old friend Bernard Dowd, who is eventually captured by a villain while they’re reconnecting. Tim then has a “lightbulb moment” when fighting alongside Bernard, leading to his coming out moment and realising his feelings for his friend.

Later, Tim catches up with Bernard on his porch and eventually accepts an invitation to go on a future date with the other man – which is just adorable.

Jackson Hyde, aka Aqualad of the Rebirth era, is a young Atlantean superhero who was a member of the Teen Titans for a short time. In DC Universe: Rebirth #1, the rebooted hero was depicted as a closeted, gay young man living under his protective mother’s roof.

He eventually discovers that his father is the super villain Black Manta and decides to come out to his Aquaman-hating dad in Teen Titans #10 (2017). In the comic, Jackson and Manta are swimming in the depths of the ocean, and the young hero decides to try to get to know his father’s side of the family.

Though the villain doesn’t respond, Jackson opens up about himself. He shared that he played soccer at school, loves math and oh by the way he’s gay. Manta seemingly accepts his son, but it’s apparent from the comic that his sexual orientation doesn’t make any difference as he says “we’re all just meat”.

In Marauders #12, a newly-resurrected Kate reunites with her oldest friends at a party after being killed by Sebastian Shaw. She catches the eye of Rachel Summers, whose long been thought to be Kate’s love interest, at the party. But before they can reconnect, Rachel leaves without saying a word to Kate.

Kate asks Magik to teleport them away, and she eventually winds up in a tattoo shop as we all do from time to time. There, she shares an innocent and sweet kiss with an unnamed tattoo artist who’s just given her some sick body ink – which is arguably the cutest and most badass coming out scene rolled into one.