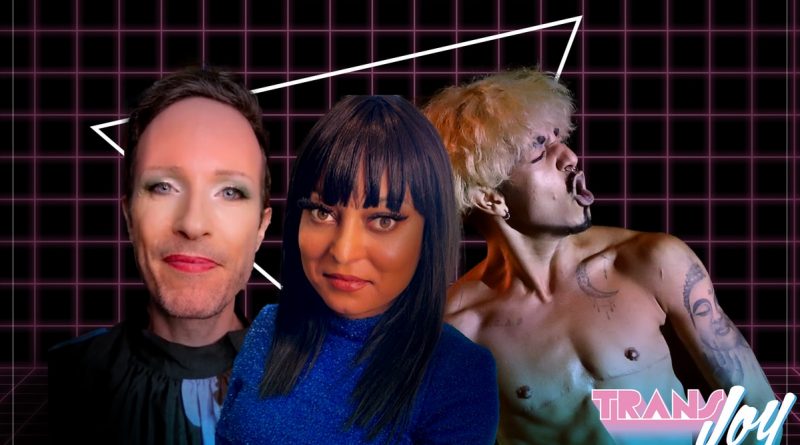 For Transgender Awareness Week, it’s important that we focus not only on the challenges that trans and non-binary communities face, but also on the joys of transness.

Many things about being trans spark joy, but these moments are rarely platformed among the slew of hostile media coverage of “trans issues”.

To counter this, PinkNews is launching a new series: Trans Joy.

To kick things off, we asked three trans people to tell us about a moment of gender euphoria that is particularly memorable or significant to them, and why.

We hope it brings you some joy.

Jeffrey Marsh: ‘I grew up to choose love for myself’

Jeffrey Marsh is a non-binary actor and activist, known for their viral videos with an inclusive and positive message about non-binary identities.

They are also the author of a bestselling Buddhist self-esteem guide, How To Be You, beloved by Oprah and named an Excellent Book of the Year by TED-Ed.

Asked to remember a landmark moment of gender euphoria they had, Jeffrey tells PinkNews about shaving their legs for the very first time, at the age of 16.

“People who are fans of my social media know that my legs are drop-dead gorgeous, they go on for days,” Jeffrey says, “and I can’t believe I kept them hidden until I was 16!”

While today they have “a different relationship with hair” and “wear heels, and have hairy legs, and love it”, as a 16-year-old shaving their legs was “a very significant step for me”.

I was maybe the happiest I had ever been.

“Because it was the first time in my young, almost adult life that I was making a choice to affirm my own gender,” Jeffrey explains. “It was fraught at the time, with secrecy, with shame, with trying to hide, with not having anyone I could talk to about it.

“But it also stands out for me now, as an adult, as one of the best days of my life. It took a long time, I used a disposable razor, which was painful. But when I had smooth legs at the end, I felt so very much myself. I was on cloud nine. I was maybe the happiest I had ever been.”

The reason that this moment of gender euphoria is so memorable to them today, Jeffrey says, is because it was “me, making the effort, for myself”.

“And that moment stands out as the beginning of that path.”

Chiyo Gomes is a UK-based drag artist who was the first trans finalist in My Gay England. Their inclusion in the competition led to the rules for My Gay World being updated to make it explicitly clear that trans men are welcome to compete.

Also a model and a sex worker, the talented artist has a loyal following and is known just as much for his sexy thirst traps and sparkling live performances as his commentary on the state of UK trans politics. Chiyo also has a very cute dog.

Asked by PinkNews about a memorable experience of gender euphoria, Chiyo recalled a moment in the heady days after having top surgery.

“The first thing that comes into my mind for a pivotal moment of gender euphoria was when I was in recovery after surgery,” Chiyo says. “I had just had my operation and honestly, it can be one of the most dehumanising experiences because for a good while you are completely unable to do anything yourself.”

“You are promised this life-changing surgery that you’ve spent years and years and years longing for, only to not be able to relish in it and enjoy it for a good few weeks,” they continue.

For some people, it can be months or even years before everything “starts to fall into place” after surgery, Chiyo says. After his operation, he felt “completely useless”.

“My partner had to help me shower, help me go toilet, help me brush my teeth, make me food,” Chiyo says.

But then there was a moment when everything fell into place for him. “I remember coming out of the shower, a week after my surgery – because you can’t shower or anything for a whole f**king week,” they say. “And drying myself, and then putting my towel around my waist.”

I put off swimming for god knows how many years.

Chiyo continues: “And that? Holy f**k balls. That was a moment…. surreal, completely and utterly f**king surreal. And honestly, that moment, everything that it stood for and everything that it meant – it was like a physical embodiment of things that I now can do and no longer have to put up with.

“Me being able to put that towel around my waist means I can now go swimming. I can go to the beach.”

Chiyo, like many trans people, says he had been avoiding the beach “for so many years”.

“Because I don’t want to wear a f***ing bikini to the beach – I’m a man!” he says. “I don’t want these boobs on my chest. I don’t want people to look at me funny. I put off swimming for god knows how many years with my partners, even though my boyfriend loves swimming. Because what the f**k am I gonna wear to the swimming pool?”

This is why putting the towel around his waist, one week after top surgery, was such a significant bit of gender euphoria for Chiyo.

“That one gesture, putting that towel around my f***ing waist was a sign of all the euphoric moments to come,” they say.

“And that for me, that was the moment.”

‘Coming out publicly was trans joy for me’: Asifa Lahore, the UK’s first out Muslim drag queen

Asifa Lahore has been known for the better part of a decade as Britain’s first out Muslim drag queen. She rose to fame in a major documentary, Muslim Drag Queens, which was watched by more than a million people.

In 2020, Asifa created Brown Queens Exist – a campaign highlighting the erasure of brown queens in the drag scene. Asifa saw that brown drag queens were struggling to get paid gigs, the complete absence (at the time) of any South Asian queens on any RuPaul’s Drag Race iteration, and then a Drag Bible list of the “top 40 queens” that didn’t feature a single South Asian queen.

Known for her activism and advocacy work, Asifa also came out publicly as trans on her YouTube channel in 2017. It was this moment, she told PinkNews, that she felt a wave of gender euphoria that she’s been riding ever since.

“I didn’t start my medical transition until about four years ago, and I basically was thinking, how can I tell everyone?” she recalls. “I decided to do a YouTube video. It was very simple, nothing elaborate, no music. Just me, I think I even did it on my phone, just me on my sofa.”

In the video, Asifa talked about “how I felt and where I was in life”.

“And that sense of relief, that sense of everyone knowing and it being out there for me, not only filed me with joy but also there was this sense of euphoria,” she says. “This sense of ultimate release, that’s the best way I can describe it.”

Feeling euphoric around gender, Asifa says, means “there is this powerful sense of – the best way I can describe it is it’s like an explosion”.

This is how I want to live my life.

Asifa felt “on top of the world” after putting out the YouTube video, which was published the day after she came out to her mum and dad.

“It was really, really powerful, and really euphoric and affirming.”

For more Trans Joy, join us on the PinkNews Instagram at 5.30pm GMT TODAY (Wednesday 17 November) where we’ll be going live with model, advocate, and writer Devin-Norelle, our very own Gender and Identity Reporter Vic Parsons and award-winning author, activist and speaker Charlie Craggs.

Got a story about Trans Joy you want to share? Get in touch with our reporter: [email protected]