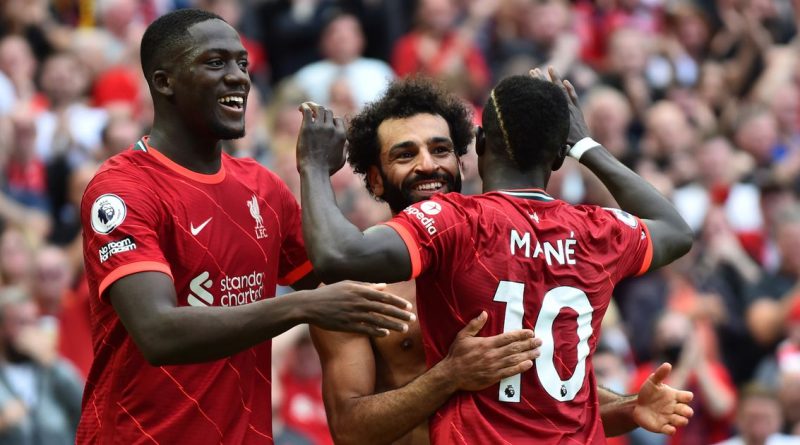 We are now five games into the Premier League season and it seems we might just have a proper title race on our hands.

The top flight has seen just one close fight for the trophy in the past seven campaigns, but even when champions Manchester City and runners-up Liverpool finished a point apart in 2018/19 they were streets ahead of the rest.

Following this weekend’s results, Chelsea, Liverpool and Manchester United are all tied on 13 points from a possible 15, while Manchester City, on 10 points, cannot be ruled out.

Brighton continued their impressive start with a fourth victory, but the tide has turned for Tottenham and West Ham.

Meanwhile, things are looking far from rosy for Norwich, Newcastle, Burnley and Leeds, who are still without a win.

Here Mirror Football rounds up all the action from week five of the Premier League.

The best managers earn their corn in the 15 minutes at half-time and Thomas Tuchel did exactly that as he got his message across in spectacular fashion at Tottenham.

The German was clearly unhappy with what his side produced in a scoreless first half in north London on Sunday, but his team responded with a dominant second-half display to win 3-0.

Sometimes it is a change of tactics that works, but Tuchel demanded greater intensity and a better attitude. He also made the astute decision to send on N’Golo Kante for Mason Mount and the Frenchman immediately gave Chelsea’s midfield superiority.

The Blues are unbeaten in the league after five games and Tuchel continues to show the wisdom of Chelsea hiring him in the wake of Frank Lampard’s sacking as he invariably gets all the big decisions right.

United needed a late penalty save to beat West Ham

Manchester United pulled off a second consecutive late away win by beating West Ham United 2-1 with a spectacular Jesse Lingard winner and a last-gasp penalty save by David de Gea, but they won’t sustain a title surge with such scrappy performances.

Ole Gunnar Solskjaer’s side struggled to have any control of the game and were repeatedly opened up by West Ham, just as they had been in their previous away trip to Wolves where they won 1-0 with an 80th-minute goal.

Manchester United have conceded 26 shots in their last two away games and still appear lightweight in defensive midfield, as Fred and the returning Scott McTominay were repeatedly beaten to the ball and outmuscled.

For all the stardust sprinkled by the return of Cristiano Ronaldo, who scored again, and the signings of Jadon Sancho and Raphael Varane, United still look far from the finished article, in contrast to title rivals Liverpool, Chelsea and Manchester City.

The season so far has been relatively free of the kind of VAR gripes that seemed to be a weekly occurrence last season.

But Leicester manager Brendan Rodgers had plenty of reasons to vent his frustration on Sunday as his side went down 2-1 at Brighton.

Brighton’s first goal came from a penalty awarded for handball by Jannik Vestergaard, although Leicester were incensed that referee Stuart Attwell changed his original decision not to award a spot kick after consultation with his assistant.

Rodgers felt that VAR should have stepped in, arguing that Vestergaard was being fouled by Neal Maupay. To make matters worse, VAR then ruled out two Leicester second-half goals.

“Jannik has been fouled, he’s been pulled down and of course his arm is up because he’s been fouled and then the ball heads onto his hand without even looking at it,” Rodgers said.

“It was a very, very harsh decision.”

Manchester City’s inability to sign a striker ahead of the new season has not been an issue in recent weeks as the goals flowed, but Saturday’s 0-0 draw with Southampton showed not all of the club’s forwards can fulfil a central striking role.

Ahead of Saturday’s match, City had scored 21 goals in their previous four home games in all competitions but against Ralph Hasenhuttl’s side at the Etihad Stadium, the champions mustered one shot on target in 90 minutes.

Raheem Sterling, one of England’s standout performers at Euro 2020, got his chance to shine as a number nine but offered very little threat, with his manager struggling to find words of praise for the forward after the match.

“He was active in terms of movement,” Pep Guardiola said. “Today we struggled a bit. He was always dangerous and ready to try to do it.”

There were times last season when Liverpool’s Sadio Mane cut a frustrated figure, unhappy with form that resulted in 11 Premier League goals from 35 appearances.

That is well below the standard he had set in previous years, but there are already signs that the Senegal international is getting back to something like his best.

His goal against Crystal Palace on Saturday that broke the deadlock in a frustrating first half for the Anfield side is his third in Liverpool’s last four Premier League matches.

It was also his 100th for the club in all competitions and broke a Premier League record for most consecutive goals against a single opponent with his ninth in a row versus Palace.

A fit, firing and happy Mane makes all the difference for Liverpool.

Which side should be considered favourites to win the Premier League title this season? Have your say in the comments section below.

Leon Bailey was the star of Villa’s win over Everton
(

Villa went into half-time at 0-0 on Saturday having played out an equal first 45 minutes against Everton, but Dean Smith had an ace up his sleeve still to play.

Leon Bailey entered the pitch in the 61st minute as a substitute for Matt Targett and by 75 minutes Villa were 3-0 up.

Matty Cash opened the scoring with a brilliant strike before Bailey’s fizzing corner forced Lucas Digne to head into his own net.

The £25million summer signing from Bayer Leverkusen then raced onto Danny Ings’ cross-field pass to blast in a third and send a packed Villa Park into raptures.

“He’s one who is going to be a crowd favourite here that’s for sure,” said Smith. “He’s got great ability and he gets bums off seats. That’s what supporters at this club want to see.”

Martin Odegaard was the star man once again for Arsenal as he curled in an exceptional free-kick to open the scoring at Turf Moor.

The Norwegian bent it over the wall into the top corner past the helpless Nick Pope.

Odegaard has hit the ground running since making the permanent move to Arsenal. What made his performance even more impressive was that he was doing it from a deeper role.

Odegaard has operated as a no.10 this season with Emile Smith Rowe dropping to the bench, but Arteta started both against Burnley to show their intent to go out and get a positive result.

Arsenal fans have been crying out for the two to be given a chance to coexist in the same team and they didn’t disappoint.

Odegaard was comfortable dictating play in a deeper role as Smith Rowe played further forward. It’s early days yet but there is plenty of encouragement that they can play together.

Ismaila Sarr was far too good for Norwich
(

While the Canaries look in trouble already, it’s a very different picture for Watford, who have a hugely exciting front line developing.

The 23-year-old picked up five goals and four assists in his debut Premier League campaign in 2019/20 and he looks set to top it this season, with his brace on Saturday moving him onto three in five matches.

He was brilliant against Norwich, completing all five of his dribbles while having five shots on target. It’s no wonder the Big Six clubs are interested in his services.

Ivan Toney was impressive against Wolves
(

Many pundits did not know what to make of Brentford following their promotion to the Premier League. Would Thomas Frank’s side struggle with the step up?

It is still early days, but the Bees have so far more than looked the part as a top flight side.

Saturday’s impressive away win over Wolves was just another example of their quality, with Ivan Toney bullying the home side’s defence and Christian Norgaard snuffing out any danger at the other end.

Toney netted a confident penalty and set up strike partner Bryan Mbeumo to make it 2-0 before Brentford defended stoutly to deny Wolves a single shot on target, despite Shandon Baptiste’s red card.

After five games their record reads: two wins, two draws, one defeat. Next up: Liverpool.

Steve Bruce is under heavy pressure at Newcastle
(

Newcastle fans calling for Steve Bruce to be sacked is nothing new, but the pressure mounted further after a frustrating draw against Leeds on Friday night.

Bruce has Allan Saint-Maximin to thank for his equaliser and all-round entertaining performance – yet the Frenchman could not prevent audible chants of “we want Brucey out” from ringing around St James’ Park.

The Magpies boss has frequently defended his position and he was forced to do so again after the draw extended their winless run to five matches and left his side 18th.

“I can’t sit here and say it’s not difficult,” Bruce said. “I understand that frustration. I really, really do.