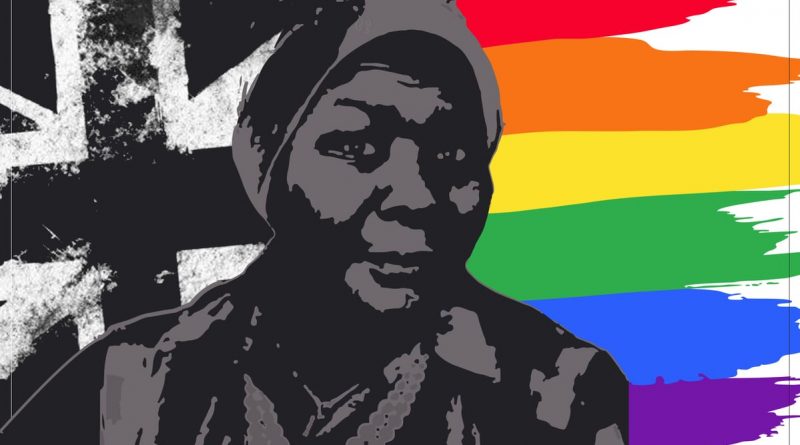 Pearl Alcock is one of Britain’s many Black LGBT+ heroes. (PinkNews)

Taylor was one of the founding members of Sistermatic, a collective of Black women promoters and lesbian-run sound system, along with Lorna Edwards, Sharon Lee and Eddie Lockhart,

Sistermatic was able to bring women together at a time when London’s Black gay community was under frequent attack, both in everyday life and through the media and political discourse. Between 1986 and the early 1990s, the Sistermatic collective performed regularly at the South London Women’s Centre and in feminist protests across London. Taylor has gone on to run many different club nights up until today including Sunday Happy Days.

Joyce has self-published a number of books and illustrated international human rights campaigns for Amnesty International, Global Justice Now. Their comics have also run in national newspapers. Most recently, they completed a Serpentine Galleries residency with Rudy Loewe featuring illustrations of global BIPOC environmental campaigners alongside a series of creative prompts inviting you to use drawing as a tool to learn about climate activism and to consider ways to make changes in your own environment.

A Black trans feminist whose work sparkles with vivacity and originality: Kuchenga is a member of the Bent Bars Collective (a letter-writing, penpal project for LGBTQ+ prisoners in Britain), and is nourished by the epistolary relationship she has with trans girls on the inside.

She’s known for work that cleaves souls open with truth and sincerity, published in many online magazines including Harper’s Bazaar and Dazed Digital, as well as in the pages of Vogue. A self-proclaimed ‘woman of wanderlust’, Kuchenga is currently writing a debut novel telling the tale of a young Black trans girl on a mission to prove a Jamaican family legend.

Local Hero 🚨 Rotimi Fani-Kayode (1955-1989) was a Nigerian born photographer, working between the intersection of race, sexuality & culture in the AIDS crisis. Moving to the UK in 1966, he returned in 1983, joining the Brixton Artists Collective to showcase his work.#LGBTHM21 pic.twitter.com/wfVsH7fn2P

Lagos-born Fani-Kayode moved to England at the age of 11 during the 1966 Biafran war. He went on to found the Autograph ABP photography collective, originally known as the Association of Black Photographers.

Working during the height of the AIDS crisis and responding to the homophobia of both Thatcherite England and his home country of Nigeria, Fani-Kayode produced images that exalt queer Black desire, call attention to the politics of race and representation and explore notions of cultural identity and difference.

Rotimi combined African and European iconography in his work as a way to contest the marginal status of Yoruba thought and explore the vexed position of the Black body in the western imaginary.

Roméo is a multidisciplinary artist, actor and creative producer. His work encourages audiences to be less passive and more engaged through an immersive aesthetic, awakening the audience’s own social responsibility through art that pollinates conversation.

In 2019, he founded Creative Humblebee, a London-based not-for-profit that produces theatre, film, literature, archiving and community projects. One such project is Kamp Kiki, a UK-based retreat for trans people from the African and Caribbean diaspora “centring on an unapologetically Black/trans approach to exploring how we care for ourselves and each other”. Kamari’s TV credits include BBC’s The Split and Silent Witness.

Davis is a model, pole performer, instructor and creative consultant. A headline performer for events such as Red Bull Music Festival, Davis is currently studio manager at Peckham’s renowned Kelechnekoff Studios, giving life and lesson to a new generation of pole performers.

At the core of Leila’s pole work is combating the erasure of Black women, LGBTQIA+ POC and sex workers from the industry – founding Blackstage Pole in 2020 in direct response to the lack of diversity and opportunities.

“A space for the community I love and see, to be loved and seen by all as it should be,” Davis once said. “I want the pole industry to be decolonised.”

Pasuka was a Black queer Jamaican dancer, choreographer, director, performer, writer, and painter. Moving to Britain in 1939, his work focused on themes of Black diasporic history, colonialism and racism, and Black social, spiritual and cultural lives and identities.

After enrolling at Astafieva dance school to refine his choreography skills and working on the film Men of Two Worlds, he went on to co-found Les Ballets Nègres with fellow queer Jamaican dancer and artist Richie Riley.

The dance company was met with critical acclaim in Britain and Europe, leading Berto to move to Paris in 1953 to work as an artist model and train as a painter.

Filani’s work has featured in exhibitions at the Tate as well as her latest piece NEGRO ECSTACY BLACK ECTASCY being part of ThorpStavri’s Factory Project. Chloe is also one of the hosts of the Dope Black Queers Podcast, a digital meeting of minds in conversation.

Our final #BHM #LocalHero is Pearl Alcock. Arriving from Jamaica in ’58 with £5 in her pocket as part of Windrush generation, Alcock moved to Brixton to realise her dream of opening a boutique dress shop on Railton Road–an area famous for connecting with London’s LGBTQ+ community pic.twitter.com/Eupqu3SpDj

Alcock arrived in London in 1958 from Jamaica as part of the Windrush generation. She went on to open a dress boutique in Brixton, and later on a cafe on the same Railton road. Underneath the boutique, however, was a shebeen (illegal club), that acted as a refuge and place of great significance for the local gay community.

Alcock’s art depicted her visions and moods, expressed in vibrant colour. Her collection Outsider Art continually used familiar and accessible materials; instead of oils or tempera, Pearl used crayons and felt-tips. Her interest was in expressing the visions that came to her instead of modes of art.

A London based multidisciplinary artist prioritising the use of analogue processes in their work, exploring recurring themes surrounding identity, sexuality, grief, family, and Congolese culture. They have a keen interest and history in archiving and documenting much of London’s queer Black and POC nightlife.

Mulenga’s work centre’s their community and the experiences within it, most notably in their ongoing photo series “#friendsonfilm, an exploration of the ways in which black bodies throughout the diaspora, navigate various spaces.” Also highly regarded for their set design, both in their own projects and in collaboration with others.

The Dope Black Queers podcast is an intentional space for us, by us, which centres our Blackness, queerness and transness. New episodes are released every other Sunday.