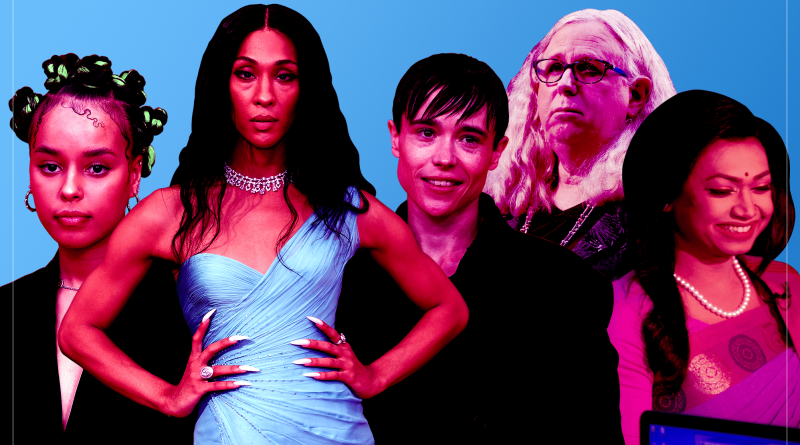 
Trans people are changing the world for the better.

The contributions of the trans community are immeasurable. Around the globe trans activists, lawmakers, entertainers, athletes and authors are making our world a richer place and pushing the needle forward.

It’s impossible to write an exhaustive list of the ways in which trans people made waves this year – this list could run into the hundreds. For Trans Awareness Week, here are just 10 of the trans people who changed our world for the better.

Precious Brady Davis is a trans activist working with the grassroots environmental organisation, The Sierra Club. She also heads the Beyond Coal Campaign, seeking to replace coal plants with sources of clean energy in the USA.

These roles are the continuation of a legacy of advocacy for justice by Brady-Davis, who in 2020 – along with partner Myles Brady-Davis – fought to change the birth certificate process in the US state of Illinois, leading to a landmark revision of the system to better recognise the gender identities of trans parents.

This year has seen Precious release her debut memoir Have Always Been Me, a story that goes from her experiences growing up in the foster care system as a gender non-conforming child to moving to Chicago and finding her voice through performance and advocacy work.

Brady-Davis hopes to make history once again as she runs for the seat of the commissioner on the Metropolitan Water Reclamation District. She would be the first trans woman of colour in the position.

2021 saw the release of Shon Faye’s book The Transgender Issue: An Argument for Justice, which broaches the topic of transgender liberation in Britain.

In it, she explores how issues of social class, employment and housing insecurity, police violence and prisons, and sex work affect the lives of transgender people.

Faye describes the book as a synthesising of the thoughts provided by the 30 plus trans writers cited in the book.

Speaking much to what is at the core of this instant Sunday Times bestseller, Faye wrote on Instagram: “To be a British trans woman at this moment and to have made it to this chart as the first British trans woman since Jan Morris 50 years ago is overwhelming.

“But I am by no means exceptional and I feel this achievement is collective.”

From lawyer to comedian to podcaster, journalist, writer, and editor (working on Drag Race UK phenom Bimini’s Release the Beast), success follows wherever Faye is heading.

The delayed 2020 Tokyo Summer Olympics saw the presence of the first openly transgender athletes to compete in the Olympic Games, including footballer Quinn, who became the first out trans athlete to medal.

A midfielder for the Canadian women’s soccer team, Quinn was proud of seeing their name on the line-up (having previously competed at the Rio Olympics before coming out).

But they couldn’t help but feel the sadness of knowing there were Olympians before them unable to live their truth.

Measured in their celebrations, they told ABC: “I feel aware of the realities, trans girls being banned from sports, trans women facing discrimination and bias while trying to pursue their Olympic dreams.

“The fight isn’t close to over, and I’ll celebrate when we’re all here.”

Even though the Olympics started “allowing” transgender athletes in 2004, super heavyweight weightlifter Laurel Hubbard of New Zealand was the first to qualify and along with Quinn was one of the first to compete this year.

Ranked 15th in the world, she faced an onslaught of backlash for her inclusion in the competition, with some calling for the International Olympic Committee to disqualify her.

A very private athlete who has repeatedly chosen to avoid media interviews, Hubbard has ignored criticism throughout her career.

“It’s not my role or my goal to change people’s minds, I would hope they would support me, but it’s not for me to make them do so,” she told Radio New Zealand in 2017.

After breaking her arm at the 2018 Commonwealth Games, Hubbard had thought her career over, so in qualifying for the Olympics she was “grateful and humbled by the kindness and support that has been given to me by so many New Zealanders”.

Though she failed to win a medal, she did win sportswoman of the year by New Zealand’s University of Otago.

A woman who dedicated her life to continued study as a means to advance her career and to build a platform to speak her mind, Shishir left her hometown to move to Dakha where she completed her masters in public health.

After approaching multiple news stations and being met with rejections she finally found an opportunity with private station Boishakhi.

She hopes for more visibility and legal protections for trans people in Bangladesh and in reflection of her achievement said: “Maybe the creator created me and paved the way for the development of the destiny of this community.”

The model, dancer, and actress who was birthed in the NYC ballroom scene become the first trans cover star for Sports Illustrated’s Swimsuit Issue in the magazine’s 67-year history.

When announcing the cover on her Instagram, Bloom wrote: “Many girls like us don’t have the chance to live our dreams or to live long at all. I hope my cover empowers those, who are struggling to be seen and feel valued.”

Brooke is portrayed by actor Tylan Grant, who reintroduced themselves to the word as non-binary a few months before their character followed.

Viewers had seen Brooke questioning their gender identity while receiving the support of new friend Ripley Lennox (portrayed by Ki Griffin, intersex and non-binary actor and activist) in the months leading up to July’s episode.

Tylan on their announcement: “Coming out as non-binary, that’s probably been one of the biggest transitions in my life and also the biggest achievement.”

In March, Dr Rachel Levine became the first out trans person to be confirmed by the Senate as a federal official.

She was handpicked for the role of assistant secretary of state for health after steering Pennsylvania through the pandemic as its health secretary.

In October, she became the first trans woman to be appointed a US admiral, and was sworn in as a four-star admiral for the US Public Health Service Commissioned Corps.

In a statement following the historic appointment, she said: “I am pleased to take this role for the impact I can make, and for the historic nature of what it symbolizes, may this appointment be the first of many like it as we create a more inclusive future.”

In a year that has seen a record number of anti-trans bills signed into law, a trend that Levine herself has harshly criticized as “draconian” and harmful to LGBT+ youth regardless of her military laurels, Levine’s position means that she’s uniquely positioned to advocate for LGBT+ health.

This year saw Elliot Page announce to the world that he is transgender while appearing solo on the cover of TIME magazine.

In a social media post, he stated: “I can’t begin to express how remarkable it feels to finally love who I am enough to pursue my authentic self.”

In a nuanced reflection, Page acknowledged that whilst his joy is very real: “I’m scared of the invasiveness, the hate, the ‘jokes’ and of violence. To be clear, I am not trying to dampen a moment that is joyous and one that I celebrate, but I want to address the full picture.”

Since coming out, Page has been vocal in his critique and condemnation of legislation and policies that continue to harm transgender people in the US and across the globe.

Coming to mass recognition giving life to the mother of all mothers, Blanca Evangelista in FX’s hit show Pose, Michaela Jaé Rodriguez was the very epitome of a leading lady from the show’s 2018 premiere to its swan song this year.

After four years of embodying a role that taught the world so much about the trans experience, Rodriguez was recognised for her portrayal by the American Television Academy. She earned her first Emmy nomination for Outstanding Lead Actress in a Drama Series, becoming the first out trans performer to be considered for one of the major acting categories.

2021 also saw the release of her debut single “Something to Say”, all about unity. “This song is for everyone around the world, for them to stop, look around and see how we have more in common than we actually realise,” she explained.

A.I.D is part of the Dope Black Queers podcast: an intentional space for us, by us, which centres our blackness, queerness and transness.